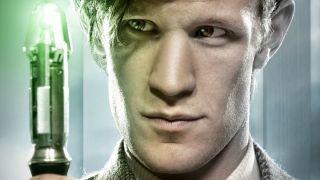 Matt Smith, perhaps most famous in geek culture for playing The Eleventh Doctor on Doctor Who, has been cast in Star Wars Episode 9, according to a report from Variety. Smith is said to play a "key role," but no clues as to who (or what) he could be are given. Admiral Thrawn? A Knight of Ren? Snoke's father? It's all up for grabs.

Whatever the case, Star Wars Reddit is having all kinds of fun with the news. Here are a few choice posts from users:

"I don't actually want this but can he just be in Star Wars as the Eleventh Doctor? I want him to start braiding Kylo's hair." - composingmelodia

"He's got the British charisma for First Order but he also has undeniable likability. I'm calling it now that there's a First Order Schism and he leads the non-Hux faction... perhaps even to joining the Resistance." - gingerbeardy

Others are just linking to this excellent piece of fan art by DeviantArt user Drombyb:

Smith will be starring alongside the usual new trilogy names like Daisy Ridley, Oscar Isaac, and John Boyega, as well as series newcomers like Keri Russell (Mission: Impossible 3), Richard E. Grant (a fellow Doctor Who alum), and Dominic Monaghan (The Lord of the Rings trilogy).

If you want to see what Smith has been up to since leaving behind the fez and bowtie, go check out Terminator: Genisys... haha, just kidding, don't do that. But do feel free to check out Netflix's The Crown, where Smith plays Prince Philip. It's quite good!

Star Wars 9 has started production, but we still know very little about it. Of course, that's what fan speculation is for, isn't it? Why not check out some of the biggest Star Wars Episode 9 theories and see what you think?