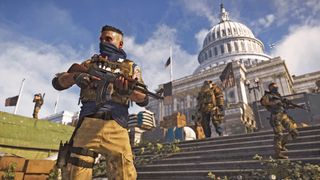 The Division 2’s release date is days away - March 15 - and if you're excited about returning to the viral post-apocalypse, you had better start clearing out some space on your hard drive. Especially if you’re planning to pick up a copy on PS4.

According to a recent FAQ posted by Ubisoft Support, the final HDD install size alongside the day one update on PS4 clocks in at a beefy 88-92 GB, which is almost double the size of the 48-52 GB install size on Xbox One and PC.

This install size is the same “whether installed from a disc or downloaded digitally”, so really the disc is just going to act as a digital unlock. It’s only worth getting yourself a physical copy if you’ve got your heart set on displaying the box, are compiling an impressive shelf of blockbuster games, or plan to trade it in at some point.

The FAQ also revealed the size of an additional 1.5 update set to go live from March 11. At 2GB, the update will bring some bug fixes and add some improvements to the main game.

Title Update 1.5 mainly addresses occurrences of audio missing or cutting out experienced by some during Open Beta.

After the buggy closed beta last month, the open beta has seen some improvements already, so hopefully this update will help the launch go smoothly.

If you're still undecided about The Division 2, check out our hands on with the all important campaign and endgame. "It has the kind of endgame feel that’s perfect for you and a bunch of friends digging in to take on something tricky together – the kind of climatic battle that relies on discussing gear and loadouts before starting, then shouted communication during."

Want to read more? Here's how The Division 2 turned Washington into a breathtaking post-pandemic playground.