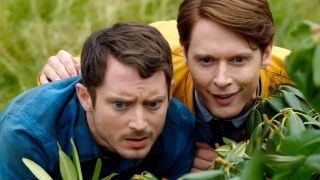 It’s fair to say that anyone who’s read Douglas Adams’s Dirk Gently novels would be unlikely to picture the man now playing the holistic detective on TV in the role. "When I was auditioning for the part and reading the books, I was thinking, ‘I look nothing like how I picture Dirk Gently,'" laughs Samuel Barnett. "He’s older than me, he’s quite portly, quite scruffy, he wears this big overcoat..."

But Dirk Gently’s Holistic Detective Agency is like no incarnation of the character we’ve seen before. Relocating Dirk to Seattle, the eight-part series has been reimagined by Chronicle scripter Max Landis – though Dirk’s methods still focus on the interconnectedness of all things. "I know my Dirk is a little different," Barnett admits, "but what Max Landis has done is absolutely capture the spirit of Dirk, the way Dirk’s mind works, and the way his universe works."

The show’s set in Seattle, but you’re playing a British Dirk. Was he always supposed to hail from the UK?

I have to say I do not know the answer, and I would be intrigued to know. For me it seems kind of essential if you’re going to adapt Dirk that you keep him as British. In a way I think the TV picks up from where the third book, that I know was incomplete, left off – at the end of the third book, Dirk is on a plane to America to solve a case, and I feel like Max has kind of picked up from that point onwards.

The show is incredibly fast-paced, with lots of things going on. Was it hard keeping track of everything?

Yeah, it was at first. I definitely spent a long time getting my head around it. Because the whole point of this show is that absolutely everything is connected and interconnected, stuff that’s happening in episodes one, two, three and four sometimes didn’t make sense to me until I read episode eight. This is the kind of show where you will be able to go back to the beginning if you want and view it in a completely different way.

Having played him for a season, do you think Dirk is a genius, a bumbler or somewhere in between?

I think he thinks he’s a genius detective! I don’t think anyone else does. I think he’s the most incompetent TV detective that we’ve got, but I also think you’re right that it’s probably somewhere in between, because I also think he’s a genius in the sense that he has a very particular talent that nobody else has. He believes that when he is given a case, every single thing that happens, no matter how disconnected it seems, will eventually lead him to a solution. If that’s not genius I don’t know what is. But his methods are so terrible. He’s got all the clues but doesn’t know what to do with them. I like to think of him as stupidly brilliant and brilliantly stupid.

The dynamic with his reluctant new sidekick, Todd [played by Elijah Wood], is also unconventional...

What you’ve got is a detective who is absolutely no good at detecting, and a sidekick who does not want to be a sidekick, who has no interest in being a detective and actually just wishes to be left alone. You look at those two and you think it’s amazing that they ever manage to do anything. But I think that’s the point of the whole thing, that the universe has decided that these two people will be the ones [solving the mystery].

Does Dirk share any traits with other TV detectives?

What I loved about what Douglas Adams created with Dirk Gently is that he made a very original detective who is unlike any other I’ve seen. I think Max has continued that in this series. Inevitably, I’ve seen on social media that there have been comparisons, certainly to Matt Smith as Doctor Who, the way I play it, and to Sherlock, which is totally fine – I think that may be about the speech rhythms. But Dirk and the way he works, he couldn’t be more different to Sherlock. He’s just a mass of intuition and gut instinct, I don’t know how often he engages his brain, whereas Sherlock is all kinds of intellect.

You were one of the original History Boys, and you and many of your co-stars [including James Corden, Dominic Cooper, and Russell Tovey] have since gone on to big things. Was there a sense at the time that this was a group destined for greatness?

Oh god no, not at all [laughs]! We were just thrilled to be working at the National with [writer] Alan Bennett and [director] Nick Hytner. Nick Hytner says that we thought it would do a very dry run of maybe 80 shows, and that would be it, and it obviously went on to do so much more than that and provided a platform for all the original eight boys... There’s no doubt that obviously there’s a lot of talent in that cast, but I think this industry is so much about exposure and being in the right place at the right time. God, I’m so proud of all of them with what everyone’s gone on to do.

Dirk Gently’s Holistic Detective Agency has just finished airing on BBC America in the US and is now on Netflix in full in the UK.

For more sci-fi news, reviews, and interviews - plus exclusive Doctor Who and Assassin's Creed features - pick up the new issue of SFX Magazine out now. Alternatively, subscribe to future issues here.