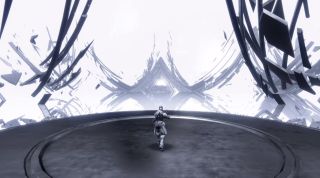 Nearly 24 hours later, Destiny 2 players have yet to crack the time puzzle which was introduced in a surprise Osiris mission in this week's reset.

If anything, players have increased the number of things they don't know. They quickly deduced that the Sundial Obelisks dotted around the solar system were spitting out codes which can be used to decrypt the glyph combinations in the puzzle itself, but that led down a rabbit hole of algorithmic nonsense which I can't even begin to dissect. Destiny's top sleuths have resorted to full-on spreadsheet warfare in order to categorize the wealth of glyph combinations, and the sheer volume is staggering. Here's the latest from PvE legend Gladd, who's been working with a crack team of players:

So yeah. That's where we're at. The scary part is that I'm not sure if players are overthinking this.

The good news is that sightings of a potential reward have given players the energy they need to continue crunching numbers. Twitch streamer Teawrex shared a screenshot of an enshrined sword which was spotted in the depths of the annals of time, and it bears a striking resemblance to the Exotic swords from the original Destiny.

Better picture of the tomb: pic.twitter.com/7bnwwgx0uOJanuary 14, 2020

It looks different from the likes of Raze Lighter and Dark Drinker, but this puzzle definitely feels Exotic-worthy, so we could be looking at a new Exotic sword. Or it could be window dressing or a total red herring, who knows. Here's hoping players get some answers soon.

Destiny 2's Season of Dawn has been fairly underwhelming thus far, between an overly familiar horde mode and the brief Destiny 2 Devil's Ruin quest, but a surprise puzzle has gotten its hooks into players.

Today's weekly reset delivered a new mission given by Osiris, and like the Saint-14 missions released earlier in the season, it takes players into the annals of time. The thing is, we're not just shooting dudes this time around. The mission is tied to a fairly complex puzzle - one so tough that, as of this writing, players have yet to crack it.

Simply put, the puzzle consists of a series of chambers connected by time portals and covered in glyphs. Some of these glyphs line up with the Obelisks dotted around the solar system, and others can be seen on a massive hexagon found at the heart of the puzzle. How these glyphs connect, and what we need to do with them, is still anyone's guess. Some of Destiny's best sleuths reckon the solution lies in the grimoire related to the Sundial, Saint-14, and Osiris, but nobody's solved it just yet. If you want to watch the race live, I'd recommend Datto's Twitch stream.

Naturally, players are also curious as to what solving this puzzle will earn them. The Season of Dawn roadmap doesn't have anything new on the calendar for this week, so whatever it is, it's a total surprise. I'm getting some serious Niobe Labs from all this, so in the best-case scenario, we may be due for another Exotic weapon.

Speaking of Exotics: we've updated our list of the best Destiny 2 Exotics you should own.