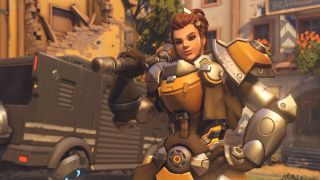 You're this close to the weekend - just one more day to go. Fortunately, these invigorating pieces of news should help you make it there no problem!

Brigitte is headed into the Overwatch fray next Tuesday

Like father, like daughter. Brigitte, a tanky support hero and Reinhardt's shield-bearing progeny, will debut on the live Overwatch servers next week, March 20. Get ready to aid your teammates with melee attacks and healing on the frontlines, making sure to work in some Rocket Flail boops that send your enemies flying off the map.

Even- and odd-cost cards will shape Hearthstone's new meta

Hot off the announcement of Hearthstone's next expansion, The Witchwood, we've got a Hearthside Chat video hosted by lead designer Dean Ayala that delves into the deck-building possibilities enabled by new Legendary cards, Baku the Mooneater and Genn Greymane. Give it a watch for some fresh card reveals, then start theorycrafting about which class you'll want to build an all odd- or even-cost deck for to make the most of your buffed Hero power.

Outer Wilds is the next game published by Annapurna Interactive

Annapurna has a knack for publishing some exceptionally engrossing games, including What Remains of Edith Finch, Gorogoa, and Kentucky Route Zero. Its next project looks just as intriguing: Outer Wilds, a first-person adventure that has you exploring a mesmerizing solar system while trapped in a 20-minute time loop.

Quake Champions gets plenty of new modes, including Instagib

Bethesda's old-school-meets-new-school FPS Quake Champions just got a massive patch today, which means more modes and plenty of goofy, Easter-themed cosmetics. Most exciting is the addition of one-shot-kill Railgun madness in Instagib mode, along with 2v2 Ranked Play and a No Abilities option for purists in custom games.

In anticipation of the full launch on March 20, a new Sea of Thieves gameplay trailer shows off the monster of the deep we've all been waiting to see. At least its massive tentacles, anyway - you may just have to brave the waters yourself if you want to get a closer look.

The 5 biggest changes in Fortnite: Battle Royale 3.3: Remote Explosives in, Smoke Grenades out, and more

Witcher's Geralt confirmed for Soul Calibur 6: "It’s not copy-pasting something from one game to the other"