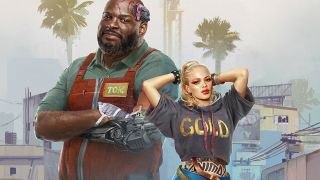 You're going to want to start freeing up space on your PS4 now, as it looks like the Cyberpunk 2077 install size is going to be at least 80GB. On the PlayStation Store page the size is listed at the bottom of all the game info, but it's worth pointing out that it is probably a placeholder at this point: according to Reddit user PhoOhThree, a developer working on the title went on discord to confirm that CD Projekt Red is still adding stuff to the game as we speak. So the Cyberpunk 2077 install size is going to be bigger than 80GB. Oh. Dear. Lord.

If Cyberpunk 2077 is due to be at least 80GB, then that means it's already bigger than The Witcher 3 with all its DLCs, which was 51GB. 80GB isn't quite big enough to beat the likes of Red Dead Redemption 2 (105GB) or Call of Duty: Black Ops 3 (101GB), but as CD Projekt Red hasn't finished working on it yet, there's always the possibility that the Cyberpunk 2077 install size could balloon to be way bigger than either of those games.

Regardless, you're going to want to start clearing out space on your PS4, Xbox One, or PC at the end of 2019, which somehow we're almost halfway through already. Cyberpunk 2077 is also due to get multiple expansions just like The Witcher 3, so even when you download the base game you're still going to have to bear in mind that there's more content coming. Gulp. We're basically going to have to hibernate with this game, aren't we?

Want to know more about Johnny Silverhand, Keanu Reeves' character? Here's the story of how Cyberpunk 2077 Johnny Silverhand came to be, or look below for our preview of the game from E3 2019!