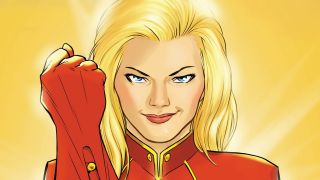 While she is about to star in the first female-led Marvel movie, Carol Danvers has not always enjoyed such a prominent position in the comics. Created by Roy Thomas and Gene Colan, she made her debut in March 1968’s Marvel Super-Heroes #13 as an air force officer who crosses paths with Mar-Vell, the original Captain Marvel. And while her origin was retconned in the recent Life of Captain Marvel mini-series, which brought her Kree heritage to the fore, Danvers initially seemed to receive her powers after being caught in an explosion, in May 1968’s Captain Marvel #1.

Written first by Gerry Conway and then Chris Claremont and drawn by John Buscema, it would be almost a decade before she resurfaced in January 1977’s Ms Marvel #1. Released to coincide with the then-burgeoning feminist movement, campaigning for equal pay was even a part of her day job.

“As was the way of that era, Ms Marvel was launched to take advantage of a trend and to jump onto a bandwagon, as the push for women’s liberation was very much in the news back then,” says Marvel Executive Editor Tom Brevoort. “So it had a lot in common with series like Luke Cage, Hero for Hire or Shang Chi, Master of Kung Fu in that it was following the signposts of what was going on in popular culture and the larger world at that moment and trying to tap into it to create a new long-lived Marvel character.”

While other characters including Monica Rambeau – who also plays a role in the film – would later adopt the Captain Marvel moniker, Ms Marvel was cancelled in 1979 after 23 issues. “Her codename just became dated-sounding pretty quickly,” says Brevoort. “That drive towards Ms as a standard term of address had largely been derailed by the start of the 1980s.”

Every new Marvel movie coming in 2019 and beyond

Now calling herself Binary, Carol became a close associate of the Merry Mutants with 1982’s Uncanny X-Men #164 before switching to Warbird and joining ranks with Earth’s Mightiest Heroes with 1998’s Avengers #4. It was Brian Michael Bendis who crucially suggested that she should be promoted to Captain Marvel after penning 2005 crossover House of M, in which – as Brevoort says – “Carol got to see the best version of herself in this altered timeline and thereafter works to try to actualise what she’s experienced within her own life.”

Making her bow as Captain Marvel in July 2012’s Avenging Spider-Man #9, Carol was granted her own monthly series the very same month. With a sharp new costume and look by Jamie McKelvie, the version that was established by writer Kelly Sue DeConnick and artist Dexter Soy is still very much the Carol that will shortly be seen on the big screen.

“Kelly Sue definitely tapped into the essence of the character in a way that really connected with a vast and often under-tapped portion of the audience in a meaningful way,” reasons Brevoort. “And part of that was the presentation of Carol as designed by Jamie and executed by Dexter. We didn’t treat her redesign in any different a manner than we would have a Captain America or Iron Man redesign, and that helped to create an iconic silhouette that reflects on Carol’s past but that is uniquely her own as well.”

Everything we know about Avengers 4: Endgame so far

While the movie will elevate Carol to household name status, Brevoort insists that her newfound fame is simply an outgrowth of efforts that Marvel had already made. “Having her image on enormous billboards as the buildup to the film starts to gear up definitely increases the world’s awareness of Captain Marvel,” he says.

“But we’ve been treating her as Marvel’s pre-eminent female lead character for several years now, pretty much since her graduation to the Captain Marvel title. So it’s great to see that plan and those objectives being realised in such a tangible fashion, as we couldn’t have counted on there being a movie when we started on this journey.”

This feature originally appeared in our sister publication SFX magazine, issue 310. Pick up a copy now or subscribe so you never miss an issue.