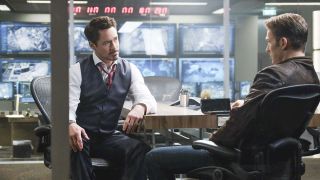 Captain America: Civil War hits UK cinemas today and if you're one of the lucky few who has already been to a Midnight showing, you know how it ends. And you probably need lots of coffee right now. If you didn't like how it ended, or even if you did, we have a very early extra for you - an alternate ending.

We asked directors Joe and Anthony Russo to act out an alternate ending for the superhero showdown, and the results were... odd, to say the least.

Yeah, you heard it here first. Cap originally tried to apologise, but ended up riding off into the sunset with Black Widow because Iron Man was "emotionally unavailable". We know which ending we prefer.