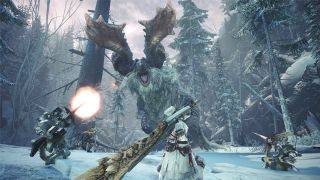 Capcom has shared the development roadmap for Monster Hunter World: Iceborne, confirming that content updates – which currently see console players get new content sooner than their PC pals – will "sync" from April this year.

Before then, however, PC Iceborne players can expect title updates from February featuring "challenging" new monsters, limited-time events, and expanded gameplay features, including a new Volcanic Region that will be added to the end-game Guilding Lands once players kick off the "special assignment quest" to find fan-favourite Rajang.

In March a second monster will arrive: Stygian Zinogre, a "more vicious subspecies of the electrifying fan-favourite Zinogre, that harnesses dragon elemental damage instead of lightning this time around". Another new region – this time Tundra – will expand the Guiding Lands even further "with a snowy landscape that’s home to bone-chilling monsters such as Barioth and Viper Tobi-Kadachi". The developer also teases that "hardened PC hunters" will also be able to attempt to take on Safi’jiiva Siege.

Hunters, here is the latest Monster Hunter World: #Iceborne Title Update Roadmap for 2020.Content will sync up on PS4, Xbox One & PC starting in April. pic.twitter.com/yYhk013yaPJanuary 19, 2020

And just in case you were wondering, yes, the Resident Evil / Monster Hunter World collaboration is rolling out for PC, too. As well as three Raccoon City-theme pendants to "spruce up" your fav weapons, you'll also be able to gather the materials necessary to craft Leon and Claire's a+ armour sets.

Before all that, however, the publisher/developer has big birthday plans for Monster Hunter World, and from January 23 until February 13, 2020, Iceborne players will be able to gather for the Grand Appreciation Fest, whilst vanilla players can pop to the Astera Gathering Hub for the returning Appreciation Fest. There's also a Holiday Joy Fest coming for PC players at the end of February, too, during which players could get, amongst other goodies, new layered armour, handler outfit, and Poogie clothing.

There's more – so much more! – so check out Capcom's tweet above for the summary or head to monsterhunter.com for the full details.

As Austin covered previously, the PC version of the otherwise excellent expansion was marred by a save data error which could effectively delete player's characters. Capcom acknowledged this issue in a Steam blog post, confirming that "save data would not convert to the new file format if the save data and the game hadn't been updated after October 30, 2018, the day when Kulve Taroth had been added to the game via Title Update". In other words, if you hadn't played since October 2018, your save wouldn't work.

Hot fix patch 10.12.01 – which was announced on January 17 – has since been deployed to address the CPU utilisation and Save Data compatibility issues.

Check out the Monster Hunter World: Iceborne dev diary for a look at what's ahead for the game.