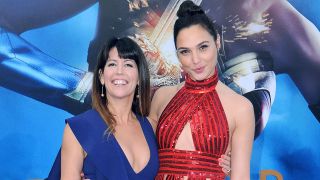 We knew it was coming, but it’s nice to finally have it rubber-stamped: Patty Jenkins is officially the director of Wonder Woman 2 (via EW). Slated for a December 13, 2019 release (check out every upcoming DCEU movie until 2020 here), Jenkins also gets a bumper pay-rise to make her the highest-paid female director of all time.

Wonder Woman 2, which apparently sees Diana rocking out in the ‘80s, follows on from the original Wonder Woman being a box-office hit. Just the $800m added to the coffers at Warner Bros...

What does the internet think of that? It says a lot about Patty Jenkins’ stature in the biz that it’s nearly universal praise across the board. But don’t just take my word for it; here’s a look at the weird and wonderful reactions to the news that Patty Jenkins is back for Wonder Woman 2, from religious iconography to pleas to direct Star Wars Episode 9. Never stop being you, internet.

Let's start with some light blasphemy

god is real and he sent us patty jenkins to direct the woman of wonder https://t.co/4M3lq0vbbN11 September 2017

2017:~ The end of the Zack Snyder trilogy.~ The beginning of the Patty Jenkins trilogy.My DCEU is alive & beautiful. pic.twitter.com/c3DUc1TjFt11 September 2017

First the world, next a galaxy far, far away?

And why not Justice League and Batgirl too? MAKE ALL THE MOVIES

Patty Jenkins is officially directing Wonder Woman 2.And yes, I am using a Marvel gif whilst talking about DC. Fight me. pic.twitter.com/gIaRWVewM511 September 2017

Elsewhere, things are getting a wee bit emotional

Bitch I'm just....so emotional, I love Patty Jenkins so much holy shit....monster was a masterpiece and the killing pilot was amazing...11 September 2017

...even if some aren't so keen on the sequel. Sad face.

Happy that Patty Jenkins is returning to direct the WW sequel but the rumoured story about an 80s setting fighting the soviets...? Meh...12 September 2017

Finally, bathe yourself in greatness

Yes! @PattyJenks is officially set to direct #WonderWoman2 work your magic Patty Jenkins, this is going to be amazing! I just know it. pic.twitter.com/v0DPBYoZ5011 September 2017