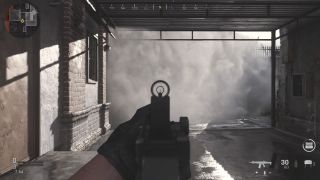 Infinity Ward is bringing a new game mode to Call of Duty: Modern Warfare, but it's not new to the franchise. First introduced with 2013's Call of Duty: Ghost, Grind is like a hybrid of Kill Confirmed and Hardpoint, tasking you with collecting dog tags from your fallen foes and bringing them to changing locations to secure points.

Just like Kill Confirmed, Grind also gives you the chance to collect your teammates' dog tags before your opponents can turn them in. You can collect as many dog tags as you want, but doing so puts you at risk of being killed in transit, causing you to drop the tags for the enemy team to collect.

As if that doesn't sound chaotic and bloody enough, the rotating locations you need to reach with the dog tags are the same for both teams, making those tense final stretches especially dicey. The blog post announcing the feature for Modern Warfare gives quite a few useful tips for different maps and playstyles, as well as general strategies for success. If you're new to the mode, or just need some freshening up, it's actually quite a useful read.

Variations of Grind mode have featured in different Call of Duty games - you might remember Fracture from Call of Duty: Black Ops 3, or Stockpile from Black Ops 4.

Grind is sure to be a real challenge to Modern Warfare players new and experienced, so we invite you to read through our best Call of Duty: Modern Warfare tips before jumping into the fray.