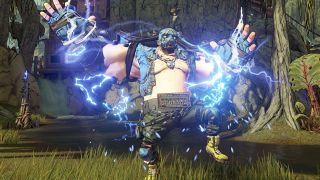 The upcoming Borderlands 3 Farming Frenzy event will make it easier to acquire the rarest loot in the game. As Gearbox explained in a blog post, the event starts tomorrow, January 16, at 9am PT / 12pm ET / 5pm GMT and will run through January 30 at the same time. During that time, the drop rate on Legendary items will be increased across the board, and Legendaries will also be more likely to drop with coveted Anointed traits.

This drop rate buff will affect farmable story bosses, Proving Grounds and Circle of Slaughter enemies, Maliwan Takedown bosses, and miscellaneous enemies including rare spawns, Hammerlock Hunts, and Targets of Opportunity. Not only that, rare spawns will appear more frequently during the event, so you'll have more shots at specific loot pools.

As it happens, Farming Frenzy will coincide with a rework of the Maliwan Takedown which will make the activity easier to complete for smaller teams. Ordinarily, the Takedown is balanced with four players in mind. But as we reported last week, from January 16 to January 30 it will scale to the size of your party. It's still balanced for max-level Vault Hunters with primo end-game gear, but it should be a lot more manageable now. So if you've had a hard time putting a team together, now's your chance to solo or duo the Takedown and receive more and better loot from it. That's what we in the business call a win-win.