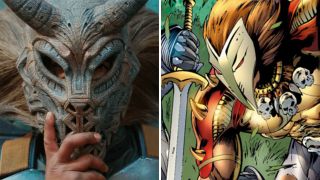 Like all the best Marvel movies, Black Panther is stuffed full of references to other entries in the MCU and to the comics on which it’s based. While this latest film certainly doesn’t go overboard with Easter eggs, it has plenty to find if you know what you’re looking for. The events of Black Panther take place roughly a week after Captain America: Civil War, so the world is still very much feeling the consequences of that. As you’d expect, there are quite a few connections between Cap and T’Challa, so they form the bulk of the secrets and references here, along with the second post-credits scene. Here’s a breakdown of all the major Easter eggs, the coolest references, and some of the smartest trivia about Black Panther.

This is probably the most obvious Easter egg in the whole movie. As Klaue escapes CIA custody, Everett Ross throws himself in-front of a bullet to save Nakia. T’Challa takes him back to Wakanda for his sister, Shuri, to heal. When she sees Everett, Shuri says he’s “another broken white boy to fix”. The previous ‘broken white boy’ is Bucky from Captain America: Civil War, who is brought to Shuri after his mind control problems. It’s no surprise, then, that Bucky shows up in the second post-credits scene, where he’s referred to as The White Wolf. About that...

White Wolf is a character from the comics

You can get a proper breakdown of that end-credits scene in our feature about every Marvel post-credits scene. Basically, the term ‘White Wolf’ comes from the Black Panther comics, and refers to a young boy - Hunter - adopted by the Wakandan royal family after he loses his family in a plane crash just inside the country’s border. That boy is raised by King T’Chaka as T’Challa’s adopted brother, and he becomes known as The White Wolf. Eventually, he becomes head of the Wakandan secret police. It’s unclear whether the MCU has decided that Bucky will simply fill this role in future movies (as head of the secret police), or whether it was just a sly nod to the comics to please fans.

Remember when Cap first gets his shield in Captain America: First Avenger? It’s made from a Vibranium alloy, which is the metal exclusively mined by the Wakandan people, and a big part of the first Black Panther movie. The big question is: how did Agent Carter and co. get hold of the Vibranium in the first place? Was there a pre-existing relationship with the Wakandan royal family as early as WW2?

Baron Zemo gets his just desserts

There’s a BBC report playing near the start of Black Panther, which references Baron Zemo’s bombing of the UN that killed T’Chaka, the previous King. This gives us a couple of pieces of MCU continuity in a single Easter egg. First it means that Bucky isn’t still accused of the blast that killed the former Black Panther - not that it was really in doubt anyway. But it’s nice to see the wheels of justice turning properly. Secondly, it dates the movie to an extent. Combined with other subtle clues, like the actual ascension of T’Challa to the throne, it means Black Panther is set roughly a week or two after Captain America: Civil War.

Most of the MCU movies focus on East Coast America, specifically New York, but Black Panther’s city scenes are focused on Oakland in California. Why is that? It’s actually where the real-life Black Panther movement began, back in 1966. The movie starts and ends in the same neighbourhood of Oakland, which is a neat nod to the comic’s real-life political namesake. Interestingly, Stan Lee introduced the Black Panther character in the Fantastic Four comics several months before the official founding of the real Black Panther movement.

When Shuri is doing her ‘Q from James Bond’ segment before the team head off to try and capture Klaue, she shows T’Challa some self-lacing shoes. The pair comment that they’re like something from the old movies their father used to watch. It’s clearly a reference to Back to the Future part 2, which features self-lacing Nikes.

The fall you should’ve seen coming

Remember the bit where Killmonger beats T’Challa in single combat to claim the throne of Wakanda? He throws him off the duelling pool in the cataract? That is one of the most iconic scenes from the comic books, so fans will have seen that coming a mile off.

The significance of masks

You know the mask Killmonger takes from the British museum? The same mask he wears when breaking Klaue out of CIA custody? That features in some of the Black Panther comics too, and the likeness is uncanny.

In the comics T’Challa puts a rhino in a headlock too, just as he does in the movie. It’s another one of the most iconic scenes, and represents a number of cute nods to the source material. The rhino isn’t armoured in the comics, though, which might have made it a little more difficult for the original Panther.

For more MCU secrets, why not check out the 30 best Marvel Easter eggs you need to know about?