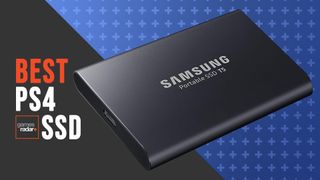 Having one of the best PS4 SSDs in your arsenal can be a serious boon. They are speedy, reliable and now more portable than ever. If you prefer to have all of your games, apps, files and saves to hand on your machine, then extra storage is definitely the way to go. And increasingly, extra storage in the form of one of the best PS4 SSDs is the best solution. I was always one to just remove games I'd finished with from my PS4 but some folk, fairly, prefer to have everything to hand - which is fair enough.

If you're on this page, you probably know already that the advantages Solid State Drives have over Hard Disk Drives are clear and distinct. SSDs decrease load times, and make it faster to transfer your games and saves. (So it's no wonder that the PS5 will be embracing SSDs and getting shot of HDDs.) This increase in, well, everything, does come at a premium but it's one that is largely justified. One might need to save a bit more to increase that budget, despite the recent, general decline in their pricing.

The performance of SSDs means some of the contenders here are some of the best PS4 external hard drives, period. But you will find other HDD and internal choices there so definitely check them out to cast your net wide. But how do you choose the best PS4 SSD for you? Well, this is one of the PS4 accessories where it might pay to ensure you have a larger-than-you-think-you-might-need budget first, then have a browse through a guide like this. Then you can very quickly determine the capacity and amount of storage you require, and then see what different makes and models offer in the way of size and design and protection. You might not get quite the vast quantity of storage you can with HDDs, but SSDs will have you operating so much quicker. You'll find this list is starting life out with the top performers in an external capacity, but we'll be adding to this regularly with a wider range of options, including internal ones too, so keep checking back.

Best PS4 SSDs at a glance

A great SSD from one of the biggest names in storage

The Samsung T5 is the best PS4 SSD because it prioritizes quality in performance and reliability. This is highlighted by its read and write speeds: up to 540mb/s. The Samsung is also very compact, durable and sleek looking. Its durability (combined with a case) making it ideal for carrying around if you're on the go between where you game - plus it's much smaller than you think, at about the same size as a small smartphone. The T5 offers incredible performance for a PS4 SSD, but it does hold its price quite well so it will always cause a little concern. However, having one of the best PS4 SSDs is about prioritizing speed and performance so and you'll get that in bag fulls with the T5 so it's very worthy of its placing in this list. If it ever goes down in price during sales, though, its as close to a no-brainer as it gets for a PS4 companion accessory.

If you're looking at getting the best-protected SSD to keep that drive extra safe - and why wouldn't you as it costs a little bit more - then the SanDisk Extreme Portable is the one for you. This will be able to withstand any sorts of accidents and is the perfect contender for those of us who are accident-prone, or who prefer to make extra sure about the protection our devices have. As well as being properly rugged, it's water and dust-resistant (to the IP-55 standard) and has a shock-resistant core for extra durability. It performs excellently too: its read speeds can challenge the Samsung T5's. And it is really compact, with a fit-it-in-your-pocket size. The safety and durability comes at a premium though and adds a bit more onto the price of the drive but it's definitely worth it when all things are considered. The protection and durability on this PS4 SSD are excellent. And if you want some extra reassurance you could even go for the Extreme Pro variant - but be prepared to see the cost rise significantly.

The best PS4 SSD for gamers who use PC too

If you want your SSD to retain some of its quality and compatibility with PC then the WD My Passport SSD is right up your street. However, it still is a strong performer as a PS4 SSD, and will offer write speeds of about 300Mbps, and read speeds of 390Mbps via the USB connection. For reference, the HDD equivalent of the My Passport, while offering larger capacity, can only give read and write speeds of 120-130 Mbps. It's worth noting that if you want an SSD for your PS4 that you can reformat and then use for PC for a time, and then reformat and go back to being a PS4 SSD, then this is a great contender for that. It can't, unfortunately, be both at the same time. However, the my Passport SSD's PC-pedigree does offer some flexibility and adds some versatility to this drive. For example, it's compatible with All The USBs, including being USB-C ready, and it has an automatic backup system and a handy password protection and hardware encryption security double whammy. Generally, however this is a quality SSD for your PS4 from a trusted maker of drives that we have no trouble recommending.