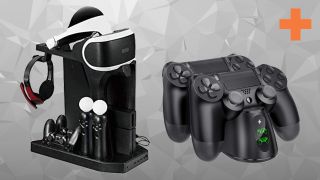 Having a messy gaming set-up is a bad thing, and it usually leads to damaged accessories and uncharged controllers. If you’re fed up of spreading controllers, charging cables, Move wands and even PSVR headsets across the floor, getting one of the best PS4 charging docks might help you sort out the clutter. Not only does it give you a specific place to house your DualShock 4s, but it’ll charge them for you too when you’re not playing.

There’s a lot of choice when it comes to the best PS4 charging docks, not surprising as the console has been available for a long time, and accessories manufacturers have had plenty of opportunities to design items that suit its needs. Along with simply holding and charging your controllers, you can cool your console, keep a stack of games hidden out of sight, even store a VR headset. Keep in mind that these docks generally require your PS4 to be in the vertical position, and will add a few crucial fractions of an inch to its height, so make sure you have enough space to stand your console this way. You’ll also need to run some sort of power connection, whether that’s a USB lead from the console or separate power brick, so you need to bear that in mind too when siting the docking station. They fit most of the best PS4 controllers, including the official DualShock 4. Here, then, are our pick of the stations available.

This one is the officially licensed version, and it does exactly what you'd expect. It charges a pair of DualShock 4 controllers at the same time, and does so through the supplied AC adaptor. That means you don't need to have your console switched on to use this, and you can charge your controllers at any time, leaving them fresh each time  you play. It even has a simple design and the official PlayStation logo on there, as this is an officially licensed product. It doesn't do much else, other than charge controllers, so don't try and hang your VR headset, Move controllers, or damp laundry on there - it won't do anything for any of these items. No cooling here, but you don't need that for just charging controllers.

Lenboken’s dock really does do it all, and is a top choice for the PS4 gamer who picked up every accessory for their console, and uses them too. It keeps two controllers and two Move wands charged, the PSVR headset neatly mounted, and adds a hook for your headphones to hang from too. It comes with a clip to change the size of its docking slot to fit all three revisions of the PS4 console, original, Slim and Pro, keeping it upright and cooling it with two high-speed fans mounted in the base. Four separate indicators show the charging status of the controllers and wands, while an additional USB hub provides extra front-mounted ports for charging while playing, or using USB storage with your console. Power comes from the PS4’s own front USB ports, with two cables supplied.

This offering from Oivo has a multi-functional design that can adapt to any model of PS4. It offers faster charging of two DualShock controllers as it uses their EXT port, rather than the microUSB port, but there’s no ability to charge Move controllers. Easy to read LED indicators flip from red to green when your controllers are fully charged. A metal structure with a non-slip base, and two fans, help cool your PS4, potentially increasing its lifespan, and there’s also space to store up to 12 games between protrusions on the rear of the unit. The dock can be powered by the console itself or a wall adapter, while a switch on the front of the unit turns the fans off when you don’t need them.

Sometimes, the simpler way is better. What more do you need than charged controllers? Your PS4 has its own fans. A shelf will hold your games. Your Move controllers don’t get used much and the PSVR lives on the floor. Happiness is a warm DualShock, and this dock gives you that. It’s compact, with LED indicators that tell you whether your controllers are charged, and gives you somewhere to put your controllers when you’re not using them, rather than leaving them attached to the console with microUSB cables. The dock is powered by USB, so you can plug it into a cellphone wall adapter. Use one with enough output, 5V/1A or better, and the dock will completely charge two controllers in two hours.

Another piece of minimal simplicity, but one that’s had a designer’s eye passed over it. Look at that subtle blue glow, the tasteful thickness of the central raised support for two DualShock controllers. It even has LED indicators to let you know when they’re fully charged. What we like about this model is that it holds your controllers in a more convenient position for you to grab them off the charger when you need them. Round the back, it’s powered by anything with a USB port, so plug it into a wall charger or connect it directly to the PS4 console. It takes about an hour and a half to charge one controller, or 2.5hrs for two.

Denuded of any controllers to charge, this dock looks rather like a trophy won by a middle manager at a golf tournament. Filled up with PSVR headset, two DualShocks, two Move controllers and some headphones, it looks like one of Boston Dynamics’ canine robots, poised to leap. The aggressive look comes fully from the position of the PSVR, which isn’t even being charged by the unit but is tilted downward into the Schwarzenegger scowl of angry robots everywhere, and looks particularly menacing with the lighting switched on. This quick-charge dock comes with a 3,000mA wall adapter, and with the quick-charging port on the back can charge five PS4 accessories at the same time. An extra layer of thought has been put into its design: there’s a touch-sensitive button to control the blue lighting, and the PSVR’s cable can be kept neatly in a special winding groove so it’s not hanging down the back. The accessories are packed tightly together, shrinking the dock’s footprint down to just 10in tall and 6.5in wide.