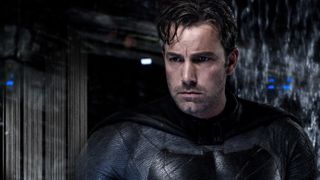 A rumour that Ben Affleck's Batman movie would be set in Arkham Asylum made the rounds back in July, and the idea of seeing the Dark Knight take down many of his colourful villains in a single movie à la the popular Batman Arkham video games had many excited (myself included). According to Heroic Hollywood's Umberto Gonzalez however, Batman may not be spending that much time in the Asylum after all:

What scoop can I give you on #BatmanDay? The standalone film DOES NOT take place entirely in Arkham with all the vaillains on the loose.September 18, 2016

Given that we now know Deathstroke will be the Dark Knight's chief villain in the movie, there's a good chance that this new info is solid. With that said, I'd be surprised if the plot ultimately doesn't allow for a little screen time to be spent at Arkham.

The location has never been properly explored in any live-action Batman movie - surprising, given that its such a major fixture in Batman lore - and with Affleck's film taking place at a time when the psychiatric facility is presumably filled with the Dark Knight's rogues gallery there's never been a better time for a tour of the madhouse. Here's hoping!