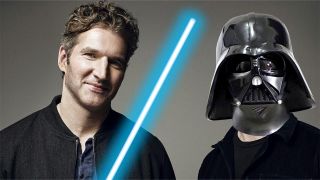 If you were to conjure the most powerful pop-culture chimera possible, it would have the head of Game of Thrones and the body of Star Wars. That's probably what Disney and Lucasfilm had in mind when they recruited David Benioff and D.B. Weiss, co-creators of the Game of Thrones TV show, to write and produce a new series of Star Wars films. Welcome to the sci-fi/fantasy singularity.

"In the summer of 1977 we traveled to a galaxy far, far away, and we've been dreaming of it ever since," Benioff and Weiss said in a joint statement on StarWars.com. "We are honored by the opportunity, a little terrified by the responsibility, and so excited to get started as soon as the final season of Game of Thrones is complete."

Going from regular swords to laser swords is clearly an upgrade, though it sounds like the pair won't do much more work on their Star Wars project until they complete their Westerosi tale with Game of Thrones season 8 first. Can't stop them from making 'vwoom vwoom' noises under their breath while filming fight scenes, though.

Disney confirmed in the same announcement that the new film series will be separate from the Skywalker Saga (i.e., the numbered episodes) and the recently announced trilogy helmed by Star Wars: The Last Jedi writer/director Rian Johnson. So even if you're not a Thrones fan, you can take away from this announcement the fact that Disney is already making arrangements for at least five more unannounced Star Wars films beyond the Han Solo movie and Star Wars 9.

Add in another if you count the much-rumored Obi-Wan movie, which may be directed and written by Billy Elliot's Stephen Daldry, not to mention the many more nebulous concepts that have flitted in and out of focus since Disney purchased the rights to the galaxy far, far away. Tl;dr: It's gonna be a whole lot of Star Wars.