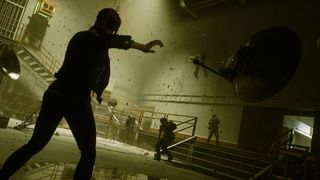 Rogue One writer Gary Whitta wants to make a movie based on Control, and developer Remedy Entertainment is all in.

Asked which game he thinks would make the best movie adaptation and whether he'd be willing to write the script, Whitta replied affirmatively, "Control." A short while later, Remedy communications director Thomas Puha responded to Whitta; "Let's talk." Whitta then invited Puha into his DMs for further discussion.

Gary Whitta's passion for video games isn't anything new, having previously worked as a games journalist and editor-in-chief of our sister publication, PC Gamer. Earlier this month, he pitched an idea to Twitter for an animated Star Fox movie based on fan art by God of War art director Raf Grassetti.

Of course, a casual Twitter exchange falls short of an official deal, but it's exciting that Remedy publicly expressed interest in the idea. Control tells a wonderfully bizarre story in a gorgeous, interdimensional, shape-shifting setting. There's no doubt a live-action adaptation would be a spectacle, at the very least.

GamesRadar+ placed Control in the top spot in our list of the 25 best games of 2019. In the wake of its awards season success, we were able to reflect on the game's impact with director Mikael Kasurinen. The following quote from Kasurinen should tell you everything you need to know about how Control defied expectations: "There's a purity to the experience. A sense of no compromises being made. We had an idea of what we wanted to achieve and just went for it, putting all unnecessary hesitations aside."

If you're just getting into Control, it can be a lot take in. Check out these essential Control tips to find your groove in the mayhem.