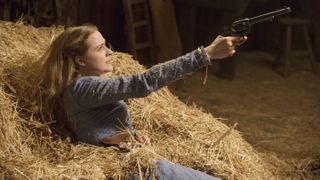 I guess it’s just time to accept that Westworld is going to ask more questions than it will answer. In fairness, we are getting some answers… they’re just leading to more questions! In episode 3 we discover the extent of Dolores’ ‘consciousness’, Teddy gets a traumatic back story, and Dr Ford is still up to… something. Read our full episode review here, or stay tuned for the nine questions I need answered after the latest episode.

1. How did Arnold REALLY die?

Because there’s just no way it was actually an accident. Anthony Hopkins’ Dr Ford basically tells us as much when he says, “we called it an accident, but I knew Arnold - he was very, very careful.” Frustratingly, he doesn’t go on to say what really happened, but the implication is that Ford’s co-creator committed suicide after his AI obsession and difficult personal life became too much for him. I think I can safely say that’s all bullshit though. Ford obviously bumped him off, right? Obviously! That guy is more creepy than Hannibal Lecter… and he was Hannibal Lecter! Something tells me that Arnold started causing problems for the ambitious young Ford - maybe he didn’t want to let the rich loose on his precious creations? -  and so he did away with him and made it look like a suicide.

Was it just faulty programming? If so, why wasn’t the Host just walking into a tree over and over again? It was as if the Host had a destination in mind, maybe to leave the park? “It’s less that he’s trying to get out of the park than trying to get up to the top of the mountain. That’s odd behavior,” showrunner, Jonathan Nolan, told EW.

“We also like the idea that an artificial mind might break in different human minds. I’m a huge fan of John Frankenheimer’s films, like The Manchurian Candidate. The idea that you have hidden purpose in a brainwashing movie. We talked about it endlessly. Brainwashing in human beings is always a little far fetched. With the Hosts, of course, the idea of having hidden purpose, or break in ways that are inhuman, is completely believable. Everything they’re doing is brainwashed, in a way, with some exceptions, like Dolores. The question is: What have they been told to do? And by who?” Intriguing.

3. What’s with the constellations?

The fact that the Host was also carving star constellations into wooden animals is also quite disturbing. Not because his work “looks like shit” as Luke Hemsworth’s Stubbs put it, but because the Host wasn’t programmed to care about constellations... or wood carvings for that matter. So what made him look up? Well, constellations were traditionally used to navigate by but as Nolan says above, the Host wasn’t looking for a way out of the park. That doesn’t mean he wasn’t looking to get somewhere though. He may have been stopped by the big hole he fell into but he definitely had a destination in mind. Perhaps the person that programmed him with these unusual desires to begin with?

4. And why did he bash his own head in with a rock?

This one is a bit easier to answer and the short answer is that he just couldn’t take it anymore. Poor guy. The deeper question is what couldn’t he take anymore, and there’s a number of theories flying around. Firstly, the idea of being dragged back to the centre of Westworld and forced to chop wood for his fellow Hosts before a bunch of guests came along and murdered them wasn’t all that appealing and so he decided to off himself. Unlikely.

Secondly, he really, really wanted to kill programmer Elsie, but despite managing to wake up, escape Stubbs, and pick up the rock, is robot programming just wouldn’t allow him to kill a human and so instead he unwillingly brought the rock down upon himself. More likely. Lastly, it’s been suggested that the Hosts’ ‘brain’ was muddled from all the terrible flashbacks he’s (probably) been having and conflicting programming from the Westworld staff and the unknown influencer Nolan mentioned above and he lost it and bashed his own head in. OR (sorry, I guess there’s four theories) was he making sure Stubbs couldn't take his head back for analysis…

It’s probably not an integral part of the Westworld story - i.e. he didn’t die at the park like Arnold - but I still want to know how Bernard’s son, Charlie, died. Mainly because it’s unlikely to be from natural causes due to his young age and it will continue to impact Bernard and the decisions he makes. We’ve already seen how the loss of his child has allowed him to overlook Dolores’ potentially dangerous programming so it’s safe to say this will continue. It would be a bit of a cliché for Charlie to have drowned after what Bernard said in this episode, but on the other hand, there was something in Bernard’s eye when he talked about letting his son go that makes me wonder...

6. What does Wyatt’s cult want?

In the most WTF moment of episode 3 we found out that there’s now an insane death cult running around Westworld led by Teddy’s archnemesis Wyatt, at least according to his new backstory. One thing we don’t know right now though, is what they want. To kill Teddy? To rule Westworld? To eat yummy brains? Frankly, it could be any of the above, but given that it all ties into Ford’s new park storyline, I’m thinking it’s going to be shocking to say the least. When Teddy talked about his hastily added backstory he revealed that Wyatt was fine until he went on a wander through the desert and came back with “some strange ideas,” that his followers don’t fear death or pain and will do anything for him. And speaking of those followers...

7. And are the cult members Hosts or guests?

You might think this is an obvious question, that Wyatt’s followers must be Hosts just like him, but don’t forget that when Teddy shot them, they didn’t even flinch. Only humans are left unharmed in the park, and Teddy tells us that “they don’t fear death, they reckon they’ve already died and gone to hell,” which would be one way of looking at their ‘immortality’ in Westworld. If you’re thinking that only programming and a storyline would convince anyone to mutilate and murder the Hosts in such a gruesome way, I’m afraid you’re already wrong. If Westworld has proved anything, it’s that they’ll always be people will to pay to get away with what they can’t in the real world. I’m pretty sure Wyatt’s followers are guests, the question now is, how does this tie into Ford’s new storyline.

8. Did Dolores really break her programming?

Basically, yes. Westworld did a good job of showcasing Dolores’ inability to use a gun in this episode. As well as having a couple of characters talk about the fact that not all Hosts are signed off to handle weapons, we actually see Teddy try and teach Dolores how to use a gun and the look of confusion on her face when she couldn’t pull the trIgger said it all. However, right before the credits rolled, she shot another Host. Does this mean that the rules around weapons are more complicated than we first thought of did she actually just successfully break her programming for the first time? “That’s exactly right. The techs are always trying to test for if a Host has breached, if they’re off their loop, if they’re doing something unscripted,” showrunner Lisa Joy explains. “Earlier we saw she wasn’t improvising, she’s still couldn’t pull the trigger with Teddy even though she’s increasingly questioning her desires. Then you get to the end of the episode and she does this big reach – she fires a gun she shouldn’t be able to fire.”

9. How did Westworld make young Anthony Hopkins so realistic?

So this is less of an intriguing question about the story of Westworld and more of a ‘how the hell did they do this?’ question about the filming of the TV show. If you’ve seen the episode, you know that there’s a short flashback from when the Hosts were first being designed and it stars a very young, a very suave-looking, Anthony Hopkins (aka Dr Ford). It’s so well done that a lot of people have been asking how the special effect teams managed it. “Who’s to say we didn’t shoot it?” Jokes Nolan. “That’s a collaboration with our incredible effects supervisor Jay Worth and a wonderful vendor, ILP. The beautiful thing about working with Anthony Hopkins is he’s had a long and storied career so when we’re looking for references for how Tony looked in his ‘30s and ‘40s, you have a lot of material to work with.”