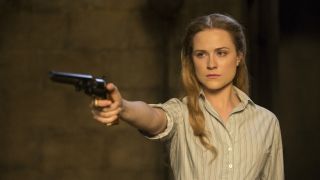 We’ve reached the halfway point with Westworld episode 5, Contrapasso, and while things are definitely moving along, there’s still a ton of unanswered questions. Without further ado, I asked the internet the questions I had after watching this week’s episode and the internet (or me) tried to answer. Don’t forget, spoilers below.

1. Why does Ford hate Dolores so much?

Because he does. I know he does. Remember that creepy bit from one of the first trailers where Dolores asks Ford if they’re very old friends, and he tells her, “No, I wouldn’t say friends Dolores. I wouldn’t say that at all…” We finally saw that bit for real in this episode and it’s lost none of its effect. The way Anthony Hopkins talks to Evan Rachel Wood during this exchange really makes me feel like he dislikes her, that he enjoys the suffering she goes through in the Park. Given his previous insistence that the Hosts aren’t real, is this swell of negative emotion towards her because she’s based on a person in real life he hates? Someone from his past? There’s already a fan theory floating around that she’s the ‘lady in the white shoes,’ and if she is a Host representation of someone Ford wants to punish, this might explain why she’s never been decommissioned, despite being the oldest Host in the Park.

The other possibility is that Ford isn’t as indifferent towards the Hosts as he pretends. We find out in this episode that Dolores was with his ex-partner Arnold when he tried to destroy Westworld, so could Ford’s dislike of her be based on the fact that she was a part of the plan to bring his world crashing down? He needs to learn to let go.

2. Why did Arnold want to destroy Westworld?

This question kind of leads on from episode 4 as well. I knew something was up when Ford started talking about Arnold’s ‘accident’ but in this week’s episode we had confirmation (from the MiB, no less) that Arnold had tried to destroy the Park 30 years ago. Question is, why?

We’ve not much to go on for now but we do know that Arnold didn’t want to let the board and the ‘money people’ in to Westworld because Ford told Park Director Cullen as much. Perhaps, having created these incredible Hosts, Arnold realised the only way he could stop Ford and the others from making a profit from pain and suffering was to destroy it all.

Of course, just because the Man in Black thinks Arnold could have destroyed Westworld doesn’t mean that’s what he was trying to do. Maybe he just wanted all the Hosts to be free, maybe he was just opening the gates.

Either way, Ford still sees Arnold as a threat which is why he spent so much time interrogating Dolores about the last time she spoke to him. You can kill a man and make it look like an accident, but when he’s buried a version of his consciousness into every Host in Westworld, there’s no escaping him.

3. What's the VR element to Westworld?

The link between Westworld and video games is pretty clear, but if you were paying attention you’ll have noticed the nod to VR in this week’s episode as well. One of the body techs talks about a going to enjoy a “nubile redhead [who’s] loaded up in the VR tank awaiting instructions”. Lovely.

When asked about what role VR plays in Westworld, showrunner Jonathan Nolan has this to say: “What we’re hinting at there, is that the Westworld park is for the folks in this world who are monied. For everyone else, you have an evolution of the VR that we’re already starting to see become more and more part of gaming; it’s the cheaper version. For the lower-paid techs, they can’t play in the Park, but they can play in a virtual version of this world or any other.”

4. Could Logan actually be seriously hurt?

This episode saw Logan, William, and Dolores travel further into the Park, away from Sweetwater, and into more dangerous territory. Here the Hosts fight back and there was even one point where Logan was being strangled by a Host in what looked like a very close-to-death situation. Now, we know the Hosts can’t kill the guests, but given where we left Logan at the end of the episode, I have to wonder if he couldn’t get seriously hurt.

Logan lovers can rest easy though, because as showrunner Lisa Joy explained to EW, the arrogant playboy should be just fine. “As you get further out the violence becomes more real but doesn’t leave a lasting mark. It’s all part of the dance. You’re meant to get a more visceral experience so the violence gets edgier and edgier.” So why even do it then?

5. Who is the woodcutter Host sending data too?

Programmer Elsie just can’t let the woodcutter Host that tried to kill her go. Which would be odd except for the fact that she was totally right and he had a 'laser-based satellite uplink' hidden in his arm! Yep, apparently Stubbs’ team who worked on the woodcutter are either really stupid or covering something up because even we could have spotted the red laser beam poking out of his hand. The important information is that he’d been using it to send data out of Westworld which begs the question who to?

Honestly, I’ve got nothing. As we’ve only met people who are either in or work on Westworld, it’s unlikely we’ve met the person the information is going to. We have however, probably met the person who is sending it because I’m thinking not all Hosts come with their very own laser-based satellite uplink arm. Bernard maybe?

6. How do Ford and the Man in Black know each other?

One of the best moments of Westworld episode 5 was the exchange between Anthony Hopkins’ Dr Robert Ford and Ed Harris’ Man in Black. So many questions came out of that meeting - what is the MiB seeking? Why does Ford want to stop him? How did the MiB save the Park? But the biggest answer I need is, how do Ford and the Man in Black know each other? Because this will eventually answer all the other questions.

Sadly, if Nolan has anything to do with it (which he does because he’s co-creator and showrunner), we’re going to need some expert puzzle-solving skills to work this one out. “The idea [in Westworld is that] this is cosplay. It’s fantasy.” He says. “You’re coming to this place putting on the mantel of a character in this world and we’re seeding the audience pieces of who Ed Harris’ character really is. He has has some longstanding business relationship with Ford and he’s clearly involved on some level with the park. We wanted the audience to do that math on what that relationship means and what their connection to one another is. And we love the idea of Ford literally intruding on the Man in Black’s gameplay and sitting down with him. It’s too delicious an opportunity to pass up.”

Joy added: “It’s also interesting, because within the tech world, Ford is like some kind of god in that domain. To an expert player like the Man in Black, you would think he’s going to be blown away by meeting him. But the nature of their relationship seem more like equal footing. The Man in Black seems much more impressed by whoever Ford’s partner is from long ago.”

Want to know more about the mysteries of Westworld? Here's the best Westworld theories and every Westworld Easter egg so far.