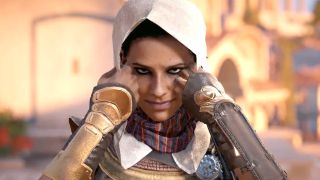 2018 (and the end of 2017) was an incredible year for games. From Rockstar’s behemoth in Red Dead Redemption 2 to Ubisoft’s vast Assassin’s Creed Odyssey
and more, some seriously good video games have been released to the world. The problem is that no one person could possibly play through all of them at release with the usual $60/£50 launch day price.

This is where we come in. Video games often decrease in price quite quickly, as long as you have the patience to hold off for the first few months. If you’re looking to pick something up on PS4 to play over the Christmas break or tide you over into January, let us guide you with these 10 essential PS4 games from late 2017 and beyond that have dipped to almost half price. And if you need more PlayStation bargains, here are the cheap PS4 deals you can still grab before Xmas.

1. Shadow of the Colossus

Kicking things off is the remake of one of the greatest PS2 games of all time, Shadow of the Colossus. You ride through a barren landscape atop your horse, Agro, with one goal in mind: to save Mono, a girl who was sacrificed because of her “cursed destiny”. How do you do that? By climbing enormous, ferocious beasts and stabbing them over, and over, and over again. There’s only so much we can say here, so check out our Shadow of the Colossus review for how the game “feels as thought provoking and artful as it did all those years ago on PS2.”

Jumping ship to an indie game now and Hollow Knight is one of the very best. It launched for PS4 in September and is a true homage to metroidvania titles. Players explore the insect kingdom of Hallownest, defeating enemies and bosses along the way. It’s not for the easily dissuaded: combat is tough and you’ll die often, but the utterly gorgeous environments and soothing soundtracks make Hollow Knight absolutely beautiful. There’s a staggering amount of content contained within so if you’re looking for one of the best indie games of 2018, Hollow Knight is a surefire choice.

Pushing the limits of “the last year” with this one but since Assassin’s Creed Odyssey launched this year and was widely praised, why not jump into the franchise with its predecessor? Our Assassin's Creed Origins review praises it's "Egyptian playground” with a “ludicrously beautiful and rich open world”, which is why we gave it a solid 5/5 last October. It paved the way for Ubisoft to create the incredible sequel seen earlier this year, so if you want an excuse to play the newer Assassin’s Creed games, Origins for this cheap is the best you’ll get.

Killing Nazis in 2018? Sign us up! Wolfenstein 2: The New Colossus is another late-2017 game and it takes the first-person shooter formula and ramps it up to 11. Not sure what that means? In the very first mission, you’re wheelchair-bound, but that doesn’t stop you from rolling around a stolen U-boat and leaving a small army of corpses in your wake. Wolfenstein 2 offers “slick shooting, plenty of spectacle, and heaps of fun characters to interact with”.

If your lifelong dream is to become the ultimate racer, The Crew 2 has you covered. The core focus is on racing cars across a scaled-down recreation of the entire United States, but you can also take control of a boat or hop in the cockpit of a plane to go from California to Connecticut. The Crew 2 is the epitome of a cross-country road trip, and you can do it all from your living room. Got friends that want to play too? Our The Crew 2 review explains that it’s even more fun sharing the open US roads with pals.

Back to the indies and Dead Cells is another metroidvania, this time with more of a dungeon-crawling aspect. Shiny loot upgrades and new abilities are the focus with this one, with each run starting off similarly but depending on the items you pick up and the routes you choose, no run will ever be identical. It’s heavily inspired by The Binding of Isaac and it shows, as you learn more every time you play and progress further in.

If some of the games listed here featuring realistic weapons aren’t your sort of thing, take a look at Ni No Kuni 2: Revenant Kingdom. “Like shooting sunshine right into your veins” is how we billed it in our Ni No Kuni 2 review from earlier this year, because it is a truly joyous game. While Studio Ghibli wasn't directly involved this time like it was with the original, its character and influence is still strong. This game that may seem childlike on the outside, but it actually contains some deep and strategic mechanics that will keep players captivated for the 40+ hour experience.

Celeste is perhaps one of the most gripping games this decade and despite being a fast paced action game, there is no combat whatsoever. You play as the titular character on her journey to ascend a mountain, but along the way you experience an emotional story. There’s just a handful of characters involved and, when you eventually reach the top of the mountain and beat the main story, get ready to tackle it all again on the harder B-side. Celeste cannot be recommended enough.

Overcooked 2 is the sequel to one of the best couch co-op games of all time. The premise is that you have to work together to produce as many cooked meals as possible in a range of environments and scenarios, but while that may sound fairly simple, we wouldn’t be surprised if Overcooked has been the reason for at least a few divorces. It’s fun. It’s chaotic, and it’s the perfect game for the family to play this Christmas. Want to know a bit more before you buy? Check out our four star Overcooked 2 review.

If Stardew Valley is your sort of thing, Moonlighter is essentially Stardew with fewer crops and more combat. Rather than tend a farm, during the day you look after a shop. Adventurers and travellers will come in and buy your wares - as long as they’re reasonably priced - then at night, you saunter off to slay some cave dwelling monsters. If you’re not sure what to make of that concept, Moonlighter “manages to perfectly balance the best bits of Stardew Valley, Dark Souls and Binding of Isaac for a game that just keeps you coming back for more” according to our review.

Price fluctuations aside that comes to just shy of £200 or $250 for the whole lot if you're really going to splurg. And there’s hundreds of hours of entertainment here, with content suitable for all ages. Perfect for a pre-Christmas bargain to help you persevere through the countless family comments about how big you’ve grown and Auntie Mabel’s outdated beliefs. Maybe when you’ve finished all of these games, you’ll be ready to do it all again with the games from 2019?