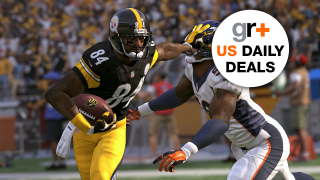 We're kicking off today's selection of gaming and gaming-adjacent deals with an $800 discount on a 4K, HDR TV, perfect for your entrance to the world of 4K gaming. And even though Black Friday's a few weeks off, we've still got some great savings on games including Madden NFL 17 and Titanfall 2.

Read through the deals below and join us again tomorrow for a new batch.

Finally, 4K TVs with HDR support are no longer the sole domain of those with way too much disposable income. This deal for a 55" LGTV for just under $1,000 - a saving of more than $800 from the list price - is proof of that. It should be a great compliment to your PS4 Pro and any other high-end content you care to plug into the three included HDMI ports.

Rocket League Collector's Edition for PS4 and Xbox One now $19.99 at Best Buy