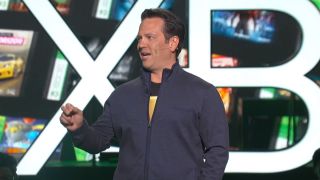 Original Xbox backwards compatibility coming to Xbox One was one of the highlights of Microsoft's press conference at E3 2017. But why is the company adding this feature and why now? Xbox head Phil Spencer explained one of the reasons in an interview with Giant Bomb, and his answer traces itself back to the increasingly popular "games as a service" model:

"One of the things I worry about - and I've talked about it a little bit - are the single-player story-driven games. It's hard when so much of the gameplay that happens on a daily basis is on these games that are long and growing and service-based, and then you get a smaller single-player game and what… how does it find its audience when so many hours are taken up?" The whole video is worth a watch, but you can skip to 3:14 to get the full context and start of Spencer's answer.

Spencer specifically called out games like Destiny and The Division as products players can sink hundreds of hours into, thus potentially neglecting smaller titles with a defined campaign. "One of the reasons I like bringing the original Xbox compatibility, the 360 compatibility back, is because I want... some of those old games should also get played in this time," he said. "Maybe I don't want to go spend $60 on a game that I think has a beginning, middle, and end that I can actually see. I hope it never gets to that but certain people might have that mentality."

Spencer seems to hope that backwards compatibility will bring more value to older, smaller-scale games (many of which are single-player focused) by making them something you can play on a modern machine. And thus, the demand and enjoyment of single-player games can continue, and we won't be trapped in a future where every game has to follow Destiny's model. Sure, Spencer admits that games as a service are great for business, but he also claims to be all for a game market that offers diverse types of experiences.

"I want all kinds of games to be successful. I don't think we want to see the death of games that have a beginning, a middle, and an end."

Now that OG Xbox games are going to be a thing, you might want to check out our list of the best Xbox games ever and pick up a few copies while you can. And for more E3 fun, watch all the E3 2017 trailers.