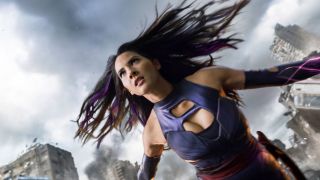 Olivia Munn makes her mutant debut in X-Men: Apocalypse as Psylocke. A servant to the film's big bad, Apocalypse, she's a highly skilled warrior who's  darn lethal with that katana. She's also got a knack for spinning through the air and generally looking cool. And hey, you know who else is generally pretty cool? Deadpool. With both characters existing in the X-Men universe there's a possibility they could unite for ultimate coolness in the X-Force movie - and Munn is game.

When asked about a team-up with Ryan Reynolds onscreen, Munn seems sold on the idea. “That would be a really cool thing to do," she tells USA Today. "What he did with Deadpool was genius and I’m so excited for him. It would definitely be cool to see Deadpool and some of the other X-Men characters gather for an X-Force movie. I think that’s what the whole world is coming to — everybody unites together, right? It’s never just one character anymore. We all just become one movie.”

She's got a point. There's a bunch of spin-offs in development revolving around the mutants that will undoubtedly crossover and easter-egg each other, until it becomes impossible to tell them apart. Aside from Josh Boone's New Mutants and the delayed Gambit film, the X-Force movie would be the perfect place to continue Psylocke's story. She fought alongside Deadpool in the comics as part of the X-Force; a group of superpowered antiheroes out to kick ass with a touch more brutality than Xavier's gang of X-Men. Plus we already know she can hold her own with Wade Wilson.