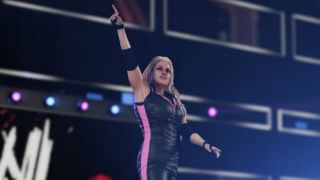 With the WWE 2K18 roster now fully revealed, tradition dictates that co-developers Visual Concepts and Yuke's adopt a policy of radio silence in the final few weeks before the game's release, to maximise interest in its annual festival of DDTs and RKOs.

It's just clotheslined that tradition over the top rope, and with some panache. Today the @WWE2Kdev Twitter account revealed four surprise screens for the game, giving us our first look at Trish Stratus, Mickie James, Dana Brooke and Zack Ryder in the new graphics engine.

James is the most notable of the four. She hasn't appeared in a WWE game since  Smackdown vs Raw 2011, but her return was telegraphed by none other than GamesRadar+ this time last year – she finished second in our chart of the 15 wrestlers (and one 'Ravishing Russian') we need as WWE 2K17 DLC.

Dana Brooke (above) and Zack Ryder (below) are less surprising inclusions on this year's roster – each is well established on Raw and Smackdown respectively. Only two wrestlers from WWE 2K17 still active in the company have been cut from this year's game: former NXT tag partners Wesley Blake and Buddy Murphy.

Trish Stratus, like long-time in-ring rival (and real-life close friend) Lita, is now entrenched as a fixture in the WWE 2K series. And, as arguably the greatest female wrestler of all time, that's how it should be.

WWE 2K18 is out on 17 October. You can read detailed profiles on all of the above and many more in our WWE 2K18 roster gallery.