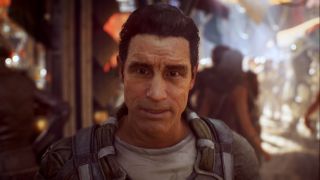 We've been here before: jaw-droppingly gorgeous game is announced, gets everyone excited, and then looks far worse when it actually comes out. At E3 2017, the most scrutinizing eyes are on BioWare's Anthem game. Demoed at the end of the Xbox press conference and supposedly running on Xbox One X hardware, it looks almost too good to be true - and thus, fans are skeptical.

But a video from the tech and graphical experts at Digital Foundry paints a fairly optimistic picture.

To the untrained eye, Anthem looks perfect. Damn near photorealistic. But DF points out several graphical errors and glitches that reveal the truth behind the illusion. One of the biggest giveaways is during a camera pan, when jagged edges show that the demo is not being rendered at full native 4K, but is utilizing checkerboard rendering.

If you're not familiar with that term, checkerboard rendering basically means that a game is only displaying half of its imagery at any time, with various filters and processes applied afterward to make it look (allegedly) as good as if every single pixel was being rendered. Think of it like a… well, checkerboard, where every red square is showing you the underlying image, and the other squares are turned "off."

Now, this isn't a huge compromise. PlayStation's Horizon: Zero Dawn also utilizes checkerboard rendering when running in 4K, and that game is still stunning in terms of visuals. Plus, the fact that these visual artifacts exist at all is evidence that we're not looking at an overly-polished PC version running at max settings, but that we really are seeing what Xbox One X can do.

Other graphical hiccups - including ground details popping in at short distance, the lack of particle effect reflections on water, or shadows affecting things they shouldn't - further cement the idea that this is being built with console specs in mind. I know it seems weird to highlight flaws as a good thing, but imperfections are what let us know it's real. Or at least as real as a pre-alpha demo can be.