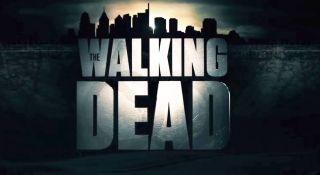 Remember when AMC said it was making a trilogy of Walking Dead movies? Well, as part of the San Diego Comic-Con 2019 schedule, we now have the first walking dead movie teaser trailer, and it's rather cryptic.

AMC already confirmed that the trilogy of movies would deal with what happens to Rick Grimes after he's taken off in a helicopter after his 'death' in The Walking Dead season 9.

In this short movie teaser, the same helicopter is clearly seen. However, if we compare these slightly out of focus shots, the first from season 9 of The Walking Dead, and the second from the trailer, they both bare the same logo - although the movie's version is glowing red, and the A on the chopper isn't visible.

Regardless of the quality of my screenshotting abilities, it's clear that this is the same helicopter Jadis takes Rick away on. So yeah, Rick is back, baby!

Now, I'm also not an expert on city skylines, but to me the silhouettes in the trailer bear a striking resemblance to the Philadelphia skyline.

As far as I know, storylines from neither the show nor the comics have been set in Phildelphia so this is totally untapped ground for the show. We're going totally off-comic, folks.

AMC itself has been tight-lipped with any more information about the movie trilogy, or indeed this teaser, but at least we know Andrew Lincoln will be reprising his role as the most famous apocalyptic survivor. The movie's title and specific release date are unknown, but it is thought to be arriving sometime next year.

The news will be a welcome surprise to Walking Dead fans though, as this really is uncharted territory for the series. And it's heading to the big screens of cinema rather than a straight to TV release, which means Walking Dead is coming back bigger than ever.

For more SDCC gossip, why not check out all the San Diego Comic-Con 2019 trailers that have been released so far?