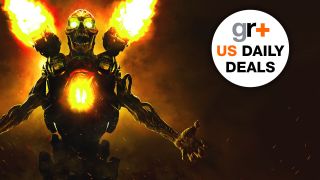 Cyber Monday has come and gone, now it's all about, erm, Wealthy Wednesday? Ok, nobody actually calls it that, but we still have a bunch of games-related savings for you. Today's selection of gaming deals includes some rather nice PS4 and Xbox One bundles as well as a bunch of games and hardware discounts.

Today's deal of the day is a sizable saving on an Xbox One S 500GB Battlefield 1 bundle, all for just $269.

View Deal: Xbox One S with Battlefield 1 for $269 from Walmart.

Check out the best US game deals below, and make sure to check in tomorrow for more PS4, Xbox One and hardware savings.

This deal will save you $30 on an already nice bargain, packing in a new Xbox One S and a copy of Battlefield 1. It's a great introduction to the current generation if you're not already here yet, or a tempting way to upgrade to the latest Xbox console.

View Deal: Xbox One S with Battlefield 1 for $269 from Walmart.

PS4 1TB FF15 Limited Edition: This bundle comes with Final Fantasy 15 Deluxe Edition, but you'll be so mesmerized by the moon graphic on the top of the console it might take you a bit to start playing. It's $449.99 at GameStop.

US daily Xbox One deals

Xbox One S 500GB: Play Minecraft online with this bundle that includes a 3-month Xbox Live Gold subscription, available for $314.99 at GameStop.

Xbox One 500GB: Start your collection with this Gears of War: Ultimate Edition and Forza 6 bundle, now $249.99 at GameStop.

FIFA 17 (PS4): Play everything from exhibitions to an RPG-inspired cinematic career mode for $39.99 at Amazon.

No Man's Sky (PS4): Try the new foundation update with this discounted deal of $33.50 at Amazon.

Doom (Xbox One): Save on the most gut-ripping shooter of the year when you buy Doom for $27.90 at Amazon.

Super Mario 3D World (Wii U): Feast on platforming greatness in up to 4-player co-op for just $14.19 at Amazon.

Donkey Kong Country: Tropical Freeze (Wii U): So many barrels, so few dollars, all just $14.36 at Amazon.

Monster Hunter: Generations (3DS): Kill giant monsters with your cat friends for $15 off, now $24.99 at Amazon.

US daily TV and hardware deals

VIZIO 4K HDR TV: Or you can save and get some extra screen space with this 65" Vizio model for $899 at Target.

Bose Home Theater System: Save $250 on great sound in a modestly sized package, now $849 at Abt.

Sony H.ear Wireless Noise Cancelling Headphones: Take $150 off on these wireless/wired cans, selling for $199.99 at Amazon.

Sony 4K Blu-ray Player: No game console? No problem, this nice 4K Blu-ray player is only $178 at Abt.