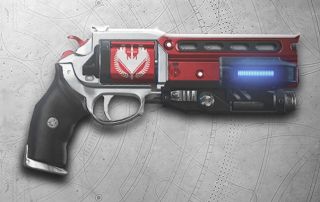 Destiny 2's PvP meta has long been dominated by Luna's Howl and Not Forgotten, the pinnacle Crucible hand cannons available from Shaxx. In an effort to make other weapons more relevant, Bungie announced it's heavily nerfing both guns in the Season of Opulence which starts in June.

The nerf is two-fold. Most importantly, both Luna's Howl and Not Forgotten will have their rate-of-fire reduced from 180 to 150. However, they will still be precision-class hand cannons - the only 150 RPM precision hand cannons in the game. This will dramatically lower their time-to-kill without removing their smooth recoil and sharp in-air accuracy.

Additionally, the unique perk Magnificent Howl - which is the main reason these guns are so strong - is being adjusted. Currently, this perk dramatically strengthens your next shot whenever you rapidly land two consecutive headshots. As you can imagine, this perk can lead to exceedingly fast kills as long as you land all of your shots, especially on 180 RPM hand cannons which usually take four headshots to kill. However, after the nerf, Magnificent Howl will only boost body-shot damage. In other words, the optimal time-to-kill with these guns will now be two headshots and a body-shot finisher.

"After significant amounts of feedback, internal discussion, and playtesting, we’ve decided to adjust how these hand cannons work," Bungie said. "For some players, these weapons can represent a significant investment of time and the personal improvement needed to acquire them. When tuning, we attempt to take into account the time commitment players make to acquire weapons and balance that against how those weapons affect the different game modes."

"The team has been hard at work on these changes, ensuring the weapons are still viable (and heavy hitters) in the sandbox," community manager dmg04 said on Twitter. "Coming from playtests, they still feel to be the 'pinnacle' legendary hand cannons of D2."

We'll need to play with the nerfed versions of these weapons before coming to any conclusions, but at first glance, these nerfs look a bit… inelegant. I have a feeling Ace of Spades and The Last Word - which are already enormously popular in the Crucible - will outclass Luna's Howl and Not Forgotten if they're only 150 RPM, and the change to Magnificent Howl sounds counter-intuitive. Why would a pinnacle Crucible weapon force you to not land headshots? The new version of the perk will also be way weaker in PvE. Then there's the issue of 150 RPM hand cannons performing very poorly on console due to recoil and unpredictable bloom (or bullet spread). It's possible Luna's Howl and Not Forgotten won't feel as snappy after their nerf, but again, we'll need to play with them before passing judgment.

As you can imagine, some players aren't pleased with these nerfs. Many PvP enthusiasts agreed something needed to be done about Luna's Howl and Not Forgotten because they were pushing other weapons out of the Crucible, but the initial response has been fairly negative. As Bungie said, these weapons take time to earn. Some players have argued that these nerfs will discourage people from obtaining these guns, and many players who already own them are frustrated that their time investment has been devalued. Somebody was going to be disappointed no matter what happened to these guns, so I can't say the immediate response is a surprise.

Bungie has definitely over-corrected with weapon and ability nerfs in the past, but it also re-corrected in several of those instances. I'm not entirely sure if this another over-correction, and until we can test this nerf for ourselves, the future of Luna's Howl and Not Forgotten remains unclear.

Speaking of balance changes: here's everything in the latest Destiny 2 patch notes.