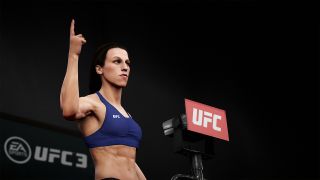 Fighting, as you probably already know, isn’t easy. Boxing is tricky enough, but once you start mixing in feet, elbows and knees - let alone clinches, takedowns and the ground game - high-level MMA is a combination of reaction test and high-speed chess, a game of feints and fakes that’s only ever a split second from ending in face-planting failure. UFC 3 has the best depiction of video game violence in existence - at least in sport - and so, as you’d imagine, its reimagined fisticuffs take a bit of getting to grips with. Here’s what I learned over hours of practice-mode experimentation, to save you some online ignominy. If all else fails, remember the words of Conor McGregor: ‘Precision beats power, and timing beats speed.’

This is key in real fighting, and crucial in-game: a move like a hook can be countered by a jab thrown even after you trigger it, but there’s no move fast enough to intercept a jab once it’s in motion. The jab also has minimal recovery - you’ll almost always have time to block or slip a counter even if you miss your jab, so it’s extremely low risk. The downside? It does very little damage - so use yours to keep your opponent off-balance, sap their stamina by intercepting strikes, or mix it in with more damaging combos. Speaking of which...

There are dozens of boxing and Muay Thai-specific combinations in UFC 3, and it’s worth learning at least a handful: if your character ‘knows’ a combo, he’ll throw the three (or more) strikes in it faster than he’d land them individually. You’ll also need to learn which combos rely on landing - or  even missing - the first shot: for instance, if you throw a hard roundhouse kick that doesn’t connect, you can move straight into a spinning backfist that’ll punish a charging opponent.

A good rule for life, of course, but it’s also smart in the UFC sense: body kicks are much easier to read than they were in UFC 2, so by throwing them with zero setup you’re asking to be countered or taken down. Similarly, while well-timed low kicks can chop an opponent down fast, you can’t just spam them: having even one blocked will take a chunk out of your leg health, while having two checked in a short space of time causes a health ‘event’ that sees you crumple. You need to set them up: the best rule of thumb is to throw a punch from the opposite hand that you’re planning to kick with to combo effectively into it, target your opponent’s front leg, and always consider your range. Or...

4. Catch them on the move

Your legs are far more vulnerable when you’re moving than when you’re planted - and even more so when you’re coming forward. If your opponent’s pressing aggressively in, use a lunge to create distance, then chop them down like a tree.

5. Aim for the liver

How realistic is UFC 3’s striking? This realistic: shots to the right-hand side of an opponent’s body, where the liver sits, do more damage than shots to the left. This makes it worth targeting, but it’s not always as simple as that - you’ll also do more damage by targeting your opponent’s ‘open’ side, or the one opposite the foot they’ve got forward, where their arm does less to cover their body. Finally, ducking forward with the right stick gives you some protection from a body shot, as it compresses your body and gets your elbows in the way. Aim to pound in a liver shot when your opponent’s upright and in orthodox stance, or when they’re blocking high.

6. Get a feel for feints

Rather than having a dedicated ‘feint’ button, UFC 3 lets you cancel basically any striking attack by tapping the block button immediately after you launch it, letting you fake anything from a low kick to a Superman punch. Use it constructively: ‘show’ your opponents your go-to moves, then feint them and follow up with something that exploits their response. A smart way to use this exploits the head movement system: throw a couple of right straights, then fake one and use your opponent’s slip to make him duck into an uppercut.

A major change for this game is the ability to use head movement while you’re on the go - including circling left as you slip right. It *can* take you to a much-improved angle... or it can see you duck straight into a nasty shot.

The important style of lunge in UFC 3 is the ‘big’ version: hold down L1/LB and flick the left stick in any direction, and you’ll take a big step that way, combined with a body shift that can make you harder - or easier - to hit. Movement-based characters like Dominick Cruz and TJ Dillashaw have ‘signature’ lunges that are even more useful - they come in less predictable patterns and are easy to confuse with offensive movements, making them great for throwing off non-savvy opponents. Use them in conjunction with mobile head movement to dance rings around almost anyone.

9. Know your opponent’s options on the ground

Generally speaking, the better your position is relative to your opponent on the ground, the fewer options he has - in full guard, for instance, any direction on the stick might offer an escape, but from back control only one or two might work. This makes blocking transitions simpler: hold R2/RT and you’ll only have to watch for a potential escape on a couple of sides, making it much harder for him to get out. The trouble? Brazilian jiu-jitsu experts and strong wrestlers have a different array of options, so knowing their best ones gives you an advantage.

If an opponent’s covering up - especially if they’re rocked and ready to be KOed - don’t just throw the same shots over and over again. Throwing shots from opposite hands - especially if you mix up straights and hooks - breaks your opponent’s block faster than spamming the same shot, as their hands can’t ‘track’ fast enough to stop them all getting through. Yes, just like in real life.

Okay, this is a half-truth: what you actually want is an Imanari roll, named after famed knee-breaker Masakazu Imanari. It’s one of the few takedowns that transitions immediately into a submission move, and so it’s the best way to finish with a flourish, or win a nail-biter with a last-ditch effort.

Joel Snape
Joel Snape enjoys Street Fighter V, any sandbox game that contains a satisfyingly clacky shotgun and worrying about the rise of accidentally-malevolent super-AI. He's also the founder-editor of livehard.co.uk, where he talks a lot about working out.
See comments