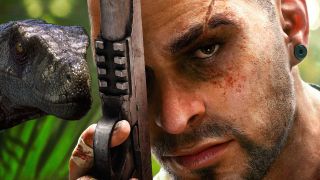 Having already quizzed the ever-stabbing life out of the Assassin's Creed community, Ubisoft is now turning its attentions towards the Far Cry fanbase. In a recent survey conducted by the French publisher and obtained by Eurogamer, participants were asked to select three of 11 potential settings wherein a future Far Cry title might take place. Those options included:

Given the publisher's tendency to include at least one genuine article per survey it's a safe bet to assume that one, if not more, of these outlandish ventures is currently under development. With 2013's Blood Dragon having established Far Cry's wackier sensibilities, coupled with the greater 'realism' of its mainline cousin, it remains difficult to rule out any one of these diverse possibilities.

Frankly, most of them sound like a damn good time, and Ubisoft would be wise to consider splitting the series into alternating serious and madcap instalments - an off-the-wall Blood Dragon title this year, a frowning, 'warlord is obsessed with me' adventure the next, in order to make best use of these killer concepts. Of course, there's also the slim, but intriguing chance that Far Cry 5 will star a time travelling cowboy battling Vietcong, cocaine pushers, zombies, vampires, dinos and a pre-freak out Mel Gibson. I vote for that one.

Are Ubisoft attempting to whet fans' appetites, throw them a curve ball, or maybe, just maybe - reach out for some genuine feedback? Have you say, and attempt to besmirch my good name in the comments section below.