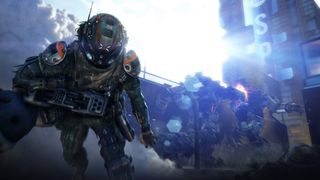 Titanfall 2 was previously said to be dropping in from orbit sometime before the end of March 2017, but GameSpot reports that an earnings report from publisher EA has narrowed down the release window even further. The company said that the highly-anticipated sequel is now expected to launch during its third fiscal quarter, which runs from October to December.

That's right, Titanfall 2 is coming to Xbox One, PS4, and PC this year, just in time for the holidays.

Personally, I'd wager that barring any delays, Titanfall 2 will show up closer to Thanksgiving or Christmas. Battlefield 1, which is also being published by EA, is set for an October 21 release date. There's also Call of Duty: Infinite Warfare from rival publisher Activision on November 4.

Two of these games may be futuristic while the other is set in the past, but they're all first-person shooters, and I doubt EA wants the games to compete with each other too much. Still, any way you slice it (and you can slice it, since Titanfall 2 is adding swords to the mix), this is good news for all you mech warriors out there.