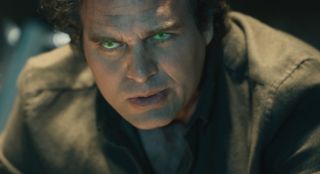 Although I'm sure that Thor: Ragnarok will be a Thor film in more than just the title, the most interesting news we've heard about the threequel so far has involved the Hulk. We recently learned that the film may include elements of the popular Planet Hulk storyline, and now Mark Ruffalo has teased that Bruce Banner and his alter-ego will have a very different dynamic when we next see them:

"I think the arc that he is ultimately making in his relationship with The Hulk and how that’s gonna resolve itself, that’s really where … nobody has gone to that place", Ruffalo told Collider. "He’s always been running from him or trying to deny it but they are coming for a collision course with each other and I think that could be pretty exciting if we can figure out a way, how to do it — multi-dimensionally. The only person in the world that The Hulk is scared of, or thing, is Banner".

This isn't the first time Ruffalo has hinted that this may be where Marvel is going with the character; back in November 2015, he noted that Banner is the only guy Hulk is afraid of, but "we’ve never seen them in the same scene together… I always imagined that that could be pretty exciting if we could pull it off".

The Hulk/Bruce Banner dynamic has made for rich storytelling in comics and cartoons, and I'm excited to see Ruffalo and co's take on it next year. There's a chance this "collision" could lead to a smarter Hulk as we progress through Phase 3 - again, something which we've had in the comics - and that would be a welcome development for the Green Goliath.