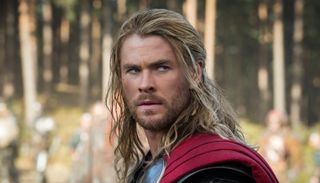 Marvel's presence at San Diego Comic Con saw the comic studio unveil a ton of first looks and sneak peeks at its upcoming roster, but with Thor: Ragnarok still in the early stages of filming there was no footage screened from the God of Thunder's third outing. Those in attendance did get to see a reel packed with concept art, and a short film lensed by Ragnarok director Taika Waititi about Thor's whereabouts during Captain America: Civil War.

Like the Guardians of the Galaxy Vol. 2 footage, it's unlikely that this amusing dip into Thor's world will make its way online in the near future. But we can get a taste of the short in this new image posted by Waititi to Instagram:

Thor is investigating who is after the infinity stones.

Based on footage descriptions the short mockumentary shows Thor trying to live a normal life. While Cap and Tony were beating the crap out of each other, Thor was dealing with a roommate situation and working on the above 'conspiracy theory wall' to figure out Thanos' evil scheme. It sounds like it plays up to Chris Hemsworth's comedic strengths, and hopefully we won't have to wait until Ragnarok hits home video to see it.