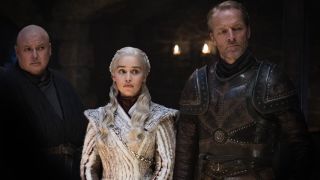 Game of Thrones season 8 episode 2 was filled with a whole host of shocks and surprises before the main event. Even though swords didn’t clash and not a drop of blood was spilled, fans still had their share of love affairs, razor-sharp wit, and even the reveal of that relation. Of course, Twitter took to it like a Tyrion to wine – here’s the best reactions to the second episode of Game of Thrones season 8 and, yes, spoilers follow.

Aunt that a kick in the head

She knows. We have all expected it to come at some point, but maybe Jon shouldn’t have chosen minutes before the biggest battle in Westeros history to know that Dany – who he’s been bumping uglies with – is actually related. Still, aunt and nephew in Game of Thrones almost seems tame though, even so, you could cut the tension in the crypt with a Valyrian knife. Is Jon eyeing up the Iron Throne?

Credit to Jon Snow, can’t be easy to tell your fuck buddy that she’s actually your auntApril 22, 2019

Smart move, turning your greatest ally into a future enemy right before an impossible battle. Ygritte was right...you really do know nothing Jon Snow. #GameOfThrones pic.twitter.com/FKETwav6gYApril 22, 2019

In one of the entire show’s sweeter moments, Jamie Lannister – the ol’ Kingslayer himself – does right by the noble Lady Brienne and anoints her Sir Brienne of Tarth. Part of me thinks this is just building up to a tragic death. At least we’ll always have this. And Tormund’s constant come-to-bed-eyes.

Ladies! Get yourself a man who supports you like Tormund supports Brienne! #GameOfThrones pic.twitter.com/MfTFvHycsoApril 22, 2019

Arya and Gendry get close

Speaking of come-to-bed eyes, Arya and Gendry did the deed. Now, are we super sure they’re not related? Because Thrones has previous for that sort of thing…

Arya writing down the names of the 3 other girls Gendry has been with before banging him #GameofThrones pic.twitter.com/A2SCg5p1b4April 22, 2019

Gendry trying to come up with a body count that won’t get him killed by Arya pic.twitter.com/EGuAKX60g0April 22, 2019

The Ghost of Ned Stark wanting a word with Gendry. #GameofThrones pic.twitter.com/23VuDAre8SApril 22, 2019

A trip down memory lane

It wasn’t everyone’s cup of mead, but this episode had a much slower pace than many might have anticipated. That just meant we got some really nice character moments as everyone took stock and remembered the past eight years or so.

Everyone around the fire when Tormund was reminiscing about his childhood #GameofThronespic.twitter.com/Li7sF2S33sApril 22, 2019

These first two episodes have been amazing. After 9 years all these characters are together and reminiscing about their journeys. Seeing them all older and stronger. True fan service. And I'm 1000% sad knowing it's all about to go straight to hell#GameofThronesApril 22, 2019

Jon Edd & Sam reminiscing about their days on line at Castle Black is such a nice scene #GameOfThronesApril 22, 2019

What a light hearted episode of #GameofThrones (singing! sex!drinking! reminiscing!) because EVERYONE IS DYING NEXT WEEK.April 22, 2019

I mean I’m all for an emotional, reminiscing episode of #GameOfThrones but when they are so few episodes left can we not pick up the pace?????April 22, 2019

No elephants either. Darn.

Cersei in King's Landing while everyone's about to die in Winterfell #GameofThrones pic.twitter.com/VPDboTY9xCApril 22, 2019

kinda missed queen cersei though. no sunshine in the whole episode.April 22, 2019

The lack of Cersei content this ep & the fact that’s it’s highly unlikely she’ll be in episode 3 just solidifies the idea for me that D&D have no idea what to do with her and have written their dumbasses into a cornerApril 22, 2019

If it wasn’t abundantly clear, shit is going to go down in the next episode. The Night King is at Winterfell’s door and everyone’s living life as if it’s their last day. Which, let’s face it, it probably is. Let’s get excited. And ready to cry.

Tonight's #GameofThrones episode was one of the best episodes yet. This was the calm before the storm we were all waiting for. The 'Jenny of Oldstones' song was the icing on an incredible dive into so many character moments we've come to know and love. It was all payoff.April 22, 2019

most wholesome episode out of all #GameofThrones episodes ever which means next week is going to be painful. Night King and Thanos on same week coming for our fictional favs pic.twitter.com/nm3up6t1CDApril 22, 2019

everything is so calm right now. everyone is drinking wine. arya is having sex. this is just preparing us for the heartbreak we are about to have #GameofThrones pic.twitter.com/7XA42Roi4DApril 22, 2019

Take a peek at some of the best new TV shows you should be watching in 2019!