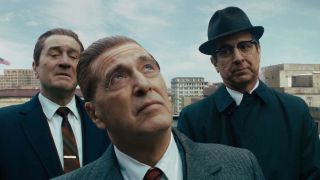 In one of the most surprising award season snubs in recent years, The Irishman didn't take home a single award at the Oscars 2020.

Despite being nominated for 10 Academy Awards, from Best Director to Best Picture, and even two nods for Best Supporting Actor for Joe Pesci and Robert De Niro, The Irishman went home empty-handed.

Instead, the big winners on the night were Parasite and 1917, with four and two awards each. Once Upon a Time in Hollywood also saw slightly diminished returns with just two awards on the night.

The Irishman was primed to be one of the leading lights of the 92nd Academy Awards but saw several early shots at gongs, such as Best Adapted Screenplay, fall by the wayside. While it may not have dictated the latter-day conversation going into this year's Oscars, it's certainly a shock to see Netflix's hit mob movie swim with the fishes – though, the fact it was released by the streaming service may have worked against the film.

Martin Scorsese's solitary win remains his Best Director Academy Award back in 2007 for The Departed.  For those who are curious, here's the full list of awards that The Irishman was up for:

For a recap of those who did take home the gold statuette, here is the Oscars 2020 winners list.