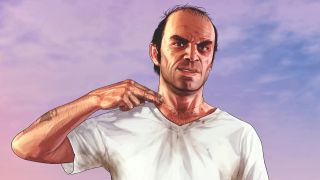 GTA 5 is a monstrously large game, full of easter eggs and hidden secrets. But one of the game's most persistent unsolved mysteries may be coming to a head. An assortment of items relating to aliens and government cover-ups known as "the Mount Chiliad Mystery" have started to reveal new secrets thanks to the recent Gunrunners update.

Okay, let's back up a bit for the people new to this: when GTA 5 launched and people started exploring all its nooks and crannies, one particular set of clues led to Mount Chiliad. A wall marking seemed to show a map of some kind, pointing to things like an alien spaceship and egg.

A UFO can be seen by standing atop Chiliad at night when it's raining, but the egg in particular remained elusive. Dataminers discovered a model for one, though it had no scripts or commands attached to it. It existed in the game's code, but was nonexistent in the game world, if that makes more sense.

But since the Gunrunners update, new code has appeared, tied to alien objects - including the mysterious egg. Uncovering the code and making it public has been the work of a team calling themselves The Game File Gurus. They've found all sorts of treasures, which have been collected and collated on the "Chiliad Mystery MegaSite," so be sure to head there if you want to contribute.

Among the cool things found so far: GPS coordinates which point to Fort Zancudo - an in-game military base known for close ties to extraterrestrial conspiracy theories. Nobody seems to have figured out how to activate or spawn these items without diving into GTA's code, but it all (seems to) suggest some alien-related event or update coming in the future.

Hey, maybe it's a tease for that GTA 5 single-player DLC fans have been asking about? Nah, probably just another GTA Online mode.