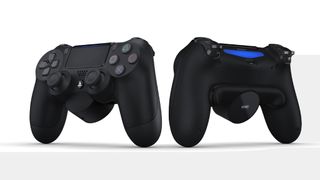 Sony has announced a new official attachment for the PS4's DualShock 4 controller, the Back Button, a customizable accessory that will be releasing in February next year for $29.99. You can check out its swanky reveal trailer below.

The DualShock 4 Back Button attachment slots into the controller's headphone jack, and provides two extra touch pads on the back of the device which can be mapped to any of the 16 potential actions that can be traditionally performed via the game pad's face buttons and triggers.

In addition, the Back Button features an in-built OLED Screen that presents real-time information on the assigned action for each of the touch pad buttons, while a headphone jack at the bottom of the attachment ensures you can still listen to your games free of background noise while playing.

PlayStation claims that the Back Button is highly customizable, allowing you to create, save, and switch between three different profiles so you can swap between controller configurations depending on the games best suited for each play style.

The product releases on February 14, 2020 worldwide, which happens to be the same year as the release of Sony's next-gen console, the PS5, and it's accompanying controller, the yet to be officially named DualShock 5.

That makes the launch timing of this Back Button rather curious, and it wouldn't be a surprise if Sony is releasing this device to make the controller more compatible with the PS5 and its slate of upcoming PS5 launch games. Before we find out about any of that, however, you can read more information about the Back Button on the PlayStation Blog here.