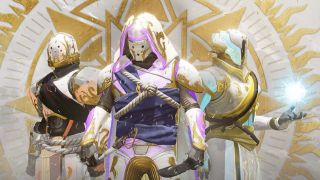 Destiny 2's been having a bit of a rough go lately. But hey, maybe a special event with cool gear that'll get players ready for the upcoming Forsaken expansion is just what it needs to bring some Guardians back from the realm of "Playing Other Games". Enter the Solstice of Heroes, the Destiny 2 summer event that kicks off July 31 and runs until August 28.

A bit more lore-heavy than other seasonal offerings, the Solstice of Heroes ties directly back to the attack on The Tower that kicked off the opening of Destiny 2. Once the event begins, speak with Ikora Rey. She'll direct you to the center of The Tower, where you'll find a statue dedicated to the Guardians who fell the day that Dominus Ghaul attacked. This Statue of Heroes will track your Moments of Triumph progress, and grant you the Solstice of Heroes armor.

Read more: Destiny 2: Forsaken review: “Cayde-6 may be dead, but Destiny 2’s heart beats on stronger than ever”

What's particularly nice about the Solstice of Heroes armor is that it's actually functional, not just ornamental. The first set you'll be granted is the 'Scorched' set, which starts at power level 240. Remember how old action figures would often be available in both regular and "battle damage" versions? Well, the Scorched set is the battle damage version of the armor you started Destiny 2 with. There are tattered cloaks, burn marks, and scuffs aplenty to be found on each class' set.

You'll upgrade this set by completing objectives tracked on each piece of armor, which will often include playing through Redux versions of the game's Red War story missions. Homecoming, Spark, Payback, 1AU, and Chosen will all be available to replay, each with slightly tweaked challenges and objectives to keep you on your toes.

Complete the objectives and return to the Statue of Heroes to upgrade your armor to the all-white Rekindled set, with a power level of 340. Complete those objectives and you can enjoy the Resplendent armor set, with a power level of 400. That'll get you on par with some of the game's best gear, meaning you'll be ready to take on The Scorn when Forsaken launches on September 4. You'll also look pretty damn cool: