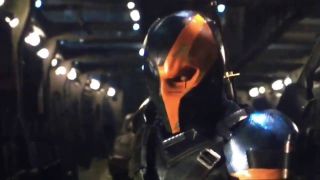 The Batman may have had its fair share of upheaval recently – a new director, plus a new script – but one constant, other than Bats himself, has remained: Joe Manganiello as Deathstroke. He’s been speaking about playing the hotshot baddie, and the intense weapons training he’s gone through in preparation for the role.

Total Film Magazine spoke to Manganiello, who is upbeat about the upcoming movie, despite the recent uncertainty, “I’m very excited,” Manganiello said before explaining his training regime, “I just started kung fu, qiqong and cutting with a live katana blade. That’s been a lot of fun.” I’d be excited too if I was getting paid to mess around with a katana!

Manganiello also wants audiences to see his side of things – a welcome change from the two-dimensional villains of comic book movie past: “These characters mean so much to people and there’s a real opportunity to polarise an audience or have them walk away maybe not agreeing with my character but understanding why he does what he does”, Manganiello adds, “That’s a fun challenge.”