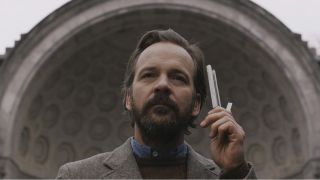 The Batman has added Peter Sarsgaard to its cast in a currently unknown role.

Beefing up an already high-profile cast; led by Robert Pattinson as Batman, Zoe Kravitz as Catwoman, and Paul Dano as Riddler; Sarsgaard is set to portray either a corrupt cop or district attorney, according to THR.

The district attorney would almost certainly be Harvey Dent, aka Two-Face, while the corrupt cop role is a bit more ambiguous. However, an Instagram post from Maggie Gyllenhaal, Sarsgaard's wife, is adding bets to Harvey Dent being Sarsgaard's role and The Batman's newest villain.

Half way through a shave... Maggie Gyllenhaal

The post, which was made a day before the news broke about Sarsgaard's casting, shows Sarsgaard in the middle of shaving his head. The ambient lighting illuminates one side of the actor's face and leaves the other side in shadows.

Considering the timing, it would be an incredible coincidence for Gyllenhaal to share something like this without intentionally teasing something. Of course, the thespian duo could simply be fanning the flames, but it's more likely they're giving a fairly unambiguous hint as to what role Sarsgaard is playing in The Batman.

With Two-Face likely joining the resistance against the Dark Knight, The Batman is shaping up to be a real nightmare for its titular hero. Most recently, the formidable John Turturro was cast to play crime boss Carmine Falcone, accompanying Dano's Riddler and Kravitz' Catwoman.