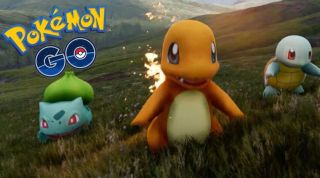 You have almost undoubtedly heard about Pokemon Go already. Your friends are playing it, tweeting about it, huge crowds of people are gathering to catch invisible monsters all over the world. Pokemon Go is wonderful at motivating people to get off their duffs and explore outside, but it’s terrible at telling you how to actually play. Here’s everything you need to know to get started.

Think of Pokemon Go as a kind of virtual scavenger hunt. With the app open on your phone, you walk around outside and, if you’re lucky, pokemon cross your path. You toss a pokeball at them by flicking your screen and if you toss it just right, you catch the creature. Different kinds of pokemon can be found in different geographical areas; wandering around a park will likely net you plenty of grass and bug types, while a day at the beach will load you up with water types.

What am I looking at?

Once you’ve customized your trainer (oooo, looking good!), you need to choose a starter Pokemon. Don’t stress too much; it doesn’t really matter which one you pick. Once that’s done, you’ll see yourself on a map of your surroundings. The map comes from Google, so it should be pretty accurate. In the lower right corner, you’ll see a box with silhouettes of pokemon who are nearby. Tap it, and you’ll see everything in proximity. One paw means they’re quite close, three paws means they’re 150-200 meters away. If a pokemon is *really* close, they’ll appear on your map. (If you see what looks like a radar ping, but no pokemon, the game servers aren’t working quite right. Try again later.) Tap a pokemon on your map and the view will switch to your phone’s camera so that you can see the pokemon superimposed on the real world. Flick the pokeball at the bottom towards the ‘mon. Do it right and the pokeball will twitch for a bit, then spew stars and say “Gotcha!” Pokemon can break out or run away, and you may just plain miss, so the number of pokeballs you need to catch a pokemon will vary. The number to the right of your pokeballs tells you how many you have left. If you run out, you can get more at a Pokestop or buy them with real money.

How to level up

Some aspects of Pokemon Go are locked off until you’ve raised your trainer to a certain level. You gain experience by doing things in the game; catching any old pokemon nets you 100 points, while catching one you’ve never found before will get you 500. Visiting a Pokestop gets a 100 points, but hatching an egg can get you 1000! The higher your level, the better pokemon you’re likely to see and be able to catch.

How to use a Pokestop

Pokestops show up on your map as blue cube-shaped icons marking a local landmark. A landmark doesn’t have to be something famous, just something very easy to spot, like the sign at the entrance to a housing development or a clock. Get close enough to the Pokestop and the cube will turn into a circle that looks like a pokeball. Tap it and an image of the landmark will show up in a circle. (This is also helpful when you’re trying to find it.) Spin the circle by swiping side to side on your phone and it’ll spit out goodies like pokeballs, potions, and eggs. You need to give them time to refill before you can hit them back up, though.

How to join a gym

You’ll spot plenty of landmarks on your map, including tall towers with a pokemon hovering over them. These are gyms, where you can battle for control...once you reach Level 5, that is. Once you hit that mark, tap on a gym and you’ll be invited to join one of three teams: Insight (yellow), Mystic (blue), or Valor (red). At the moment, it doesn’t matter which one you pick, so just go with your favorite color or use your friends’ teams as a guide. Teams battle for control of gyms, so if you see a blue gym for example, that means a Mystic player currently controls it.

How to battle at a gym

When you get close enough to a gym to actually have a battle, you’ll be presented with a series of opponents. The first one on your screen is the weakest; swipe to the side to see the others, which get stronger and stronger until you discover the gym leader, who’s gonna be a tough fight.

If the gym is the color of your team, you won’t battle, you’ll train. You select one pokemon to fight with, and if you win, you help your gym get stronger and earn more slots for fighters. The higher a gym’s level, the more pokemon an opponent will have to beat to overtake it. Pick the pokemon you want to train with by tapping on it and then hitting the glove icon in the lower right hand corner.

If the gym is controlled by another team, you’ll select six of your pokemon for the upcoming battle. You’ll always start from the bottom and work your way up, but it’s good to plan ahead, factoring in pokemon strength and types.  To actually fight, quickly tap on your pokemon. In the upper left hand corner, you’ll see a meter filling up as you tap. When it’s full, hold on your pokemon to use its Special Attack. If you’re well matched against your opponent’s pokemon type, you’ll see that your attack is “super effective.” If you’re poorly matched, you’ll see “it’s not very effective.” You can also dodge attacks by swiping left or right. Reduce your opponent’s HP (the bar over their head) to zero and you’ve won! As long as you win one fight, you’ll help weaken an enemy team’s hold on that gym, so don’t worry if you don’t have strong enough pokemon to take over the whole gym.

Do I need to spend money?

Probably not, but it depends on where you are. If you’re close to plenty of Pokestops, they should keep you well stocked enough that you don’t need to buy anything. However, if you don’t want to leave it up to chance, or if hitting up Pokestops is inconvenient, you can spend real-world money on pokeballs, lures, incense and the like. The one item you may want to pick up with real money is a bigger bag, which lets you carry more items, but wait to play a while before you decide if that’s necessary for you.

What does incense do?

Incense draws pokemon to you for 30 minutes. You can tell it’s active when a purple ring of smoke circles around your trainer. It also shows you how much time you have left in the upper right corner of the screen. Incense is most effective when you’re moving around, so if you’re somewhere you don’t expect to be again soon, like the beach, it’s a smart idea to use it to scoop up plenty of ‘mons. To use it, go to items, and tap incense.

What does a lure do?

Lures draw pokemon to a Pokestop for 30 minutes. So why not just use incense, then, you ask? Because lures work for everyone but incense only works for you. You’ll know someone’s activated a lure on a Pokestop when it showers pink confetti.

What’s up with the eggs?

Eggs hatch pokemon! You’ll find them at Pokestops, and you’ll need to put them in incubators (which you can also get from Pokestops) to hatch them. You’ll have to walk a certain distance to get each egg to hatch, and yes, you really do have to do the walking out in the real world. The further you have to walk, the stronger that pokemon is likely to be. Your progress is measured via GPS, not steps, so a treadmill’s no good, and you have to be traveling under 10 mph, so cars and public transit are also out. A bike will work, just remember you need to have the app open and running.

Pokemon can evolve into bigger, stronger pokemon. Pick any ‘mon in your collection, and you’ll see how much candy you’ll need to make it evolve. You earn candy by catching that kind of pokemon, and also by transferring it back to the Professor. (Scroll down to see the “transfer” button.) Each pokemon needs its own kind of candy, though, so you can’t use pidgey candy to evolve your duoduo. You don’t have to evolve pokemon if you don’t want to, though. Evolution is either to get you stronger Pokemon for battles, or to help you catch ‘em all. It also nets you experience, though, so you may want to do it even if you don’t care about battling or getting all the ‘mons.

Depends on what you mean. The higher a pokemon’s CP number, the stronger/more powerful it is. Evolved forms of pokemon are better in battle than primary forms, and some pokemon are much more rare than others. So it depends on what you want; a pokemon for battling, one that’s rare, or one that you like the best. (Or all of the above!)