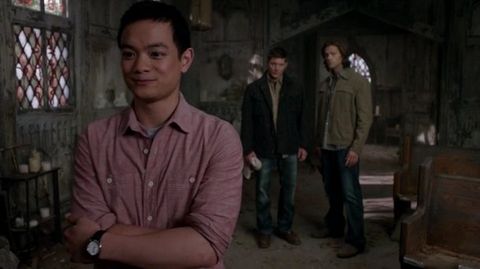 Supernatural 8.01 “We Need To Talk About Kevin” TV REVIEW

THE ONE WHERE One year after Dick exploded in their faces (snarf) Dean busts out of purgatory and reunites with Sam, who’s abandoned life as a hunter. It’s not long until the brothers hit the road again, however, after a call from young prophet Kevin Tran and the promise of a way to close the gates of hell forever.

VERDICT After four years of Angels, Alphas and Leviathans, newly-crowned showrunner Jeremy Carver strips the show back to its bare essentials with the season eight premiere, “We Need To Talk About Kevin”. Demons are front and centre for the first time in years; a goblet of blood, demon trap and the demon knife all serve as neat continuity devices; and once again it seems the gates of hell will feature prominently in the season arc. What’s new is a peculiar flashback structure, which unfortunately leaves this episode feeling a little disjointed.

In Dean’s case it works, allowing Carver to dripfeed the story of his time in purgatory without keeping Sam and Dean apart for any significant length of time (something recent seasons of Supernatural have fallen foul of); in Kevin’s case it can be justified as a visual exposition aid; but Sam’s unintentionally hilarious dog tale comes across like one of the spoof flashbacks from Airplane! Kudos to director Robert Singer for giving each flashback a distinct style, but the sickly soft focus of Sam’s flashback simply adds to the hilarity. Everything we need to know about his change of heart is dealt with much more deftly in the scene where he leaves Amelia and fido in the middle of the night, why not just leave it at that?

The remainder of the episode never dazzles as you might hope, but it does a solid job establishing the groundwork for season eight. None-too-subtle character shifts give the Winchester relationship a new dynamic – Dean is feral, paranoid, hardened by his time in purgatory. Sam’s been softened by his year of domestic tranquillity, clearly exhausted by life as a hunter, though given how tirelessly we’ve seen him work to find Dean in the past, it seems a little out of sorts that he wouldn’t even try to find him. Kevin returns with a new do, and a new confidence, though it’s difficult to reconcile Kevin’s phone messages with Kevin in the flesh – he didn’t seem that miffed to see Sam after all those missed calls!

Cas “didn’t make it” (we’ll see about that next week) and Dean’s new purgatory-bro, Benny, is full of sinister potential, but little more at this stage. As expected it’s Crowley that makes the biggest impression, with a handful of memorable zingers and a brutally cruel moment of neck-twisting vengeance. After lurking in the background for a few seasons it seems the King of Hell will finally get the attention he deserves this year, and about time too.

TITLE-TATTLE The new title flash feature demonic symbols as a backdrop, we think, which would tie in with the focus on 'ol black eyes so far this season.

BEHIND THE SCENES Jeremy Carver has been writing for Supernatural since season three’s “Sin City”. He’s penned a number of fan-favourite episodes, including “Mystery Spot”, “Changing Channels” and “A Very Supernatural Christmas”. More recently he and Anna Fricke developed Being Human US for the Syfy channel.

Kevin (to Channing): “There’s a demon in you and you’re going to your safety school.”

Supernatural Season Seven currently airs on Living in the UK. Season eight airs on The CW in the US.