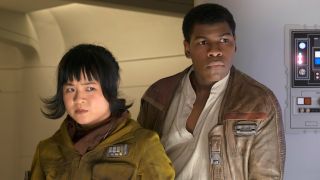 Star Wars: Rogue One may not have had them, but seeing as the original cut of Star Wars: The Last Jedi is super long, we’re going to get a lot of deleted scenes come 2018. That even includes *sniff* some of director Rian Johnson’s “babies.”

Speaking to Collider, Johnson revealed that the original cut was “well over three hours” but that the finished product has turned out “much better at two and a half [hours].”

If you’re worried that the deleted scenes are going to be lost in the dark recesses of space and time then you’ll be pleased to know the director has plans to plonk most of them all on the home release.

“I actually just reviewed the deleted scenes we’re gonna have on the Blu-ray,” Johnson says, “There’s a bunch of – some of my favourite scenes ending up having to come out… There’s a lot of really substantial, really good scenes. There’s a couple whole sequences actually that we lifted out.”

Some more Porg material is almost a guarantee at this point. It will also be interesting to see what didn’t make it, especially as Johnson rated them so highly. It’s refreshing, too, to see a director so open about the positive side of cuts.

Talking about a director’s cut, Johnson was straightforward: “The director’s cut is the movie that’s going out in theaters.” No Justice League-style petitions here, then. Either way, it’s going to make The Last Jedi Blu-ray a must-have, if it wasn’t already.

For something else – deleted or otherwise – that might make it into Star Wars: The Last Jedi, check out this possible spoilerrific return.