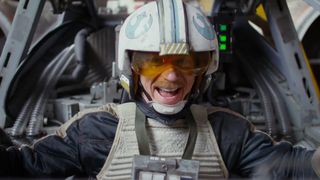 Warning: Vague spoilers for Star Wars: Rogue One ahead. There's nothing too specific, but if you want to avoid knowing anything, wait to read this until after you've seen the movie.

If the scene in Rogue One where X-Wing pilots give out their callsigns felt particularly authentic to you, well, that's because it was. Turns out director Gareth Edwards spliced in previously unused New Hope footage, updating and cleaning the image to fit with his 2016 film.

"As we’re walking around [Skywalker Ranch], and doing all the cool things and looking at the Millennium Falcon and trying on Han Solo’s jacket and things like that, in the back at the bottom was all these cans of film. And we said, 'What are they?' and they said, 'Oh, it’s Star Wars,'" he recently told Radio Times. "We got the neg documents and found the clips from A New Hope that hadn’t been used. And there’s pilot photography and lines that were never featured in A New Hope."

Gareth was allowed to use the scrapped footage - and so he did, handing it off to Industrial Light & Magic. ILM then digitized and manipulated the reels so they wouldn't stand out (at least not in a bad way) and they were inserted alongside the new callsign shoutouts. Edwards told Radio Times he was afraid it would be a lot of effort for little to no payoff, but I suspect the more sharp-eyed fans noticed and appreciate the gesture.