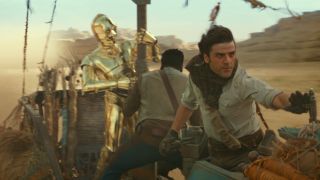 Star Wars: The Rise of Skywalker will bring the trilogy of trilogies to an end later this year. Somehow, despite the movie's impending release, we still know very little about Episode IX's plot. How does Palpatine return? Does Rey turn to the dark side?

Speaking to our sister publication Total Film for their latest issue, Oscar Isaac – who plays Poe Dameron in the sequel trilogy – teased how the final instalment in the Skywalker saga will see the "chess match" between the Sith and Jedi finally come to an end. “What’s amazing about the story and the script is that you learn that both the Sith and the Jedi have been playing a very long game,” the actor said. “From the get-go, there’s been this chess match. All these pieces have been played. And now we get to see who gets checkmate.”

J.J. Abrams, who returns to direct The Rise of Skywalker, also discussed the movie with Total Film, with the filmmaker discussing the "mind-boggling challenges" Episode IX posed. “The ending of this trilogy of trilogies is a tricky thing,” he said. “This movie has  to work on its own. It’s got to have its own beginning, middle and end. It can’t make the mistake of a lot of sequels, where you just assume a character is beloved, where the movie suffers because the character is suddenly lacking. We can’t assume anyone cares.”