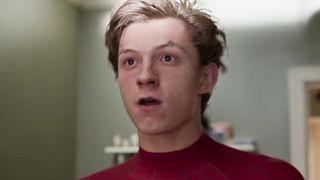 Tom Holland has been chatting on the web (no puns please) about his experience filming Spider-Man: Homecoming – and may have just let slip a cool little spoiler about one of the movie’s big action scenes. Possible spoilers follow.

Speaking on a Facebook Live Q&A, the British actor talked about the scariest moment he experienced whilst filming: “There was some time where they dangled my poor stunt double under a helicopter and dunked him in a lake.”

As we know, spiders – and Spider-Man – don’t like rain, let alone going headfirst into a freezing lake, but, interestingly, this is a moment definitely not featured in any of the trailers for Spider-Man: Homecoming. Could this be hinting at a climactic scene with Vulture? Either way, Holland confirms “I don’t get paid enough for that shit.”

But Holland put in the hard work where it mattered, as he went back to school in preparation for playing Peter Parker. This wasn’t just any old school, oh no, he “was enrolled in a high school in the Bronx as a secret” and attended for three days, accent and all, before dropping out.

Dunking stuntman in lakes? Actually putting Peter Parker in a school? Clearly there’s no expense too great for Marvel these days. What next, sending Chris Pratt into space? Okay, I’d actually be down with that.