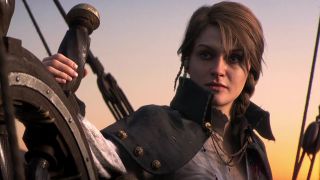 Your dreams of piracy and plundering are on hold until 2020, because Ubisoft's Skull and Bones is now scheduled to set sail sometime after April 2020. It's the second delay for the online, open-world pirate game, which skipped E3 2019.

Skull and Bones was originally announced in 2017, and we even got to play it in 2018, but there's been not a whiff of briny ocean or parrot poop since. If it can deliver on its 2020 date, the wait might just have been worth it. The game promises to let you command your own ship on the high seas, working together with other salty sea dogs or doing battle on the ocean waves. It's not a simple as it sounds though, you'll need to contend with dynamic weather and world events, other factions, and learn the best trade routes to plunder. While we wait for our galleons to dock and set about training our parrots to swear in six languages, here's everything we know about the upcoming Ubisoft adventure.

Skull and Bones release date - when is it coming?

Skull and Bones just got delayed again, as announced during the publisher's latest earnings call.  The earliest we would possibly be taking the wheel of our very own ship will be April 2020, as Ubisoft confirmed that the game won't launch until the 2020/2021 fiscal year (but didn't provide any definitive release date). A video posted to Skull & Bones' official Twitter hopes to stem the tide on any disappoints as Ubisoft continues to work on the game. "Rest assured that we are working as hard to ever to make sure the game is going to be as great as possible, and quality remains our number one focus," says producer Karl Luhe. "We will be back as soon as we can with exciting new updates."

Skull and Bones beta - when and where can you sign up?

Skull and Bones gameplay - what will we do?

Crudely, Skull and Bones gameplay is all about sinking other ships. The subtlety is in the method and the reason. You're essentially out there to get loot and become a powerful pirate - the trailer makes many references to getting to the top of the food chain. Sailing works similar to how it does in Assassin's Creed 4: Black Flag - you steer around the ocean, then shoot cannons at other boats. There are different types of shot, which allow you to cause damage to other ships or take out their ability to sail or shoot back. Each boat can be fitted with a special ability now so, for example, you can have a cannon that fires eight shots in one volley, or the ability to fire without waiting for a cooldown.

You'll have different ways of sailing too. We see in the demo that you can disguise yourself as ships from different factions, and you can set your sails for speed, rather than combat or the ability to manoeuvre.

The idea, however, is that you can team up with other pirate ships and combine your various abilities to take down the really big enemies and claim maximum loot. You'll need to buddy up to sink the big warships, even if you're powered up yourself. The only problem here is that alliances are fluid in Skull and Bones, so you may find that your team mates turn on you when it's time to divide the treasure.

Skull and Bones trailer - where can I watch it?

There's a new trailer from E3 2018, and you can watch it above. It sets the tone for the game and gives us a taste of some of the characters and customisation options we'll have in the game. And it's pretty damn exciting too...

There are loads of ways to customise your ship in Skull and Bones, and it seems that different set-ups will be useful for different scenarios. We see the ability to change sails, weapon set-ups, and figureheads in the demo, but expect there to be loads more options in the final game.

You'll need to adapt because the conditions of the game will change according to the predictions of a fortune teller. Yes. You're given an outlook for each session and will have to change your play accordingly - so, for example, high winds mean that there are more merchant ships to plunder, but greater competition for them. Not sure how that correlates, but it's all in the demo. She'll also advise on weather and trade routes too.

It's worth noting that you can also hop off your ship and look around your own private island. Expect there to be plenty of distractions here too.

Weather will play a role in Skull and Bones too. We see in the trailer that the pirate crews encounter a massive typhoon. Expect there to be rough seas, high and low winds, and maybe even lightning storms to contend with too.

And then there's the kraken... We saw the kraken at E3 in 2017, but it didn't show up in the latest footage or trailer. It's probably still in the game but we noticed that the gameplay has changed (and evolved) significantly since last year, so perhaps all the over-the-top stuff has gone. Probably not, though.

Skull and Bones broadsided with another delay, and won't be at E3 2019

The E3 2018 demo of Skull and Bones is all about fortune tellers, pirate allies and salty slaughter

Skull and Bones, that Ubisoft pirate game you'd forgotten about, is getting delayed

Black Flag without the Assassins: The internet reacts to Skull and Bones from E3 2017