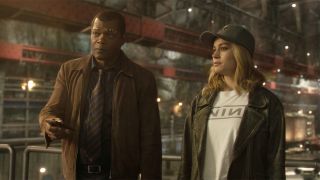 The back and forth over Captain Marvel being able to time travel in the MCU is almost as confusing as time travel itself. First, Samuel L. Jackson, who plays Nick Fury, seemingly spilled the beans by saying Brie Larson’s character *could* travel through time, and now he’s walked that back completely, saying he “made up” those Captain Marvel powers.

“I was just blowing smoke,” Jackson expands, attempting to explain how it came to be that a slip of the tongue led to everyone talking about Captain Marvel and time travel for the next few days. “It was actually a mistake. We were tired at the end of the day, we had a bunch of people on set… Those days they bring reports on set and you’re working all day and they want you to stop in the middle of the day and talk to a table full of people.”

For context, here’s what Jackson said during that 2018 roundtable: “At some point, we'll find out how powerful she is and all the things that she's capable of. She's one of the few people in the Marvel universe that can time travel, so...”

I’ll leave it up to you to decide whether he’s telling porkies or the truth, but this should perhaps temper expectations of Captain Marvel waltzing into Avengers 4: Endgame and being able to do anything and everything. She might be able to time travel—but we’ll have to wait until April to find out for sure.