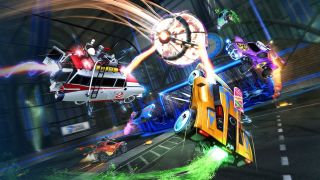 Epic Games acquired Rocket League and its developer Psyonix back in May, so in a way, it's no surprise to see the game enacting loot box practices virtually identical to the ones in Fortnite. As Psyonix recently announced, later this year Rocket League will remove all random loot boxes and replace them with "a system that shows the exact items you're buying in advance."

As the studio noted, "this is similar to changes implemented earlier this year by the Fortnite Save the World team." More to the point, it's similar to Save the World's new and quite literally transparent loot boxes, which show would-be buyers exactly what they'll get. If you don't like what's inside, you can wait for the box to refresh and buy a different one later. "We are making this change so we can show you the rewards of each [loot box] one at a time, which gives you more choice in the [loot boxes] you decide to open," Epic said at the time.

Psyonix didn't specify when Rocket League's new loot system will arrive, nor did it clarify whether it's removing randomized boxes entirely or just swapping them for transparent ones. That said, Epic's oversight and the wording of the announcement points to the latter. I suspect Rocket League will still have loot boxes, their contents just won't be hidden anymore. And as Psyonix confirmed, "Rocket Pass Premium, DLC Cars, and Esports Shop items will continue to be offered for direct purchase."

Loot box outrage has calmed down a bit since the great Star Wars Battlefront 2 backlash of 2017, but paying real money for random digital items is still very much a hot topic in the industry at large, in no small part because more and more countries are passing - or at least pushing for - legislation which regulates loot boxes and, often, severely fines studios. Consequently, more and more companies, including Epic, seem to be trying to head off loot box controversy and regulations by giving their in-game loot systems clearer rules and guidelines. I wouldn't be surprised to see more games adopt Fortnite Save the World's transparent loot boxes, especially if Epic continues its studio shopping spree.

As GamesIndustry reports, Rocket League's change of heart comes at a pivotal moment for loot boxes in general. According to the ESA - which you may know for carelessly leaking private information, but I digress - Nintendo, Sony, and Microsoft are in the process of enacting platform-wide policies that would require games to display the odds behind their loot boxes. This wouldn't show players exactly what they're going to get it, but it would give them more information to use when making purchasing decisions. As it happens, the odds driving Rocket League's loot boxes were revealed last year.

Additionally, according to ESA chief counsel of tech policy Michael Warnecke, "many of the leading video game publishers of the Entertainment Software Association have decided that they are going to implement a similar approach at the publisher level to provide consumers this information and give them enhanced information to make purchase decisions." This plan lines up perfectly with the changes made to Fortnite Save the World and now Rocket League, to say nothing of several other franchises on the mend in the wake of tightening loot box laws.

The Netherlands is among the most prominent countries to take action against video game loot boxes, but it's far from the only one.